The People Behind Our Products: Julia Kocis 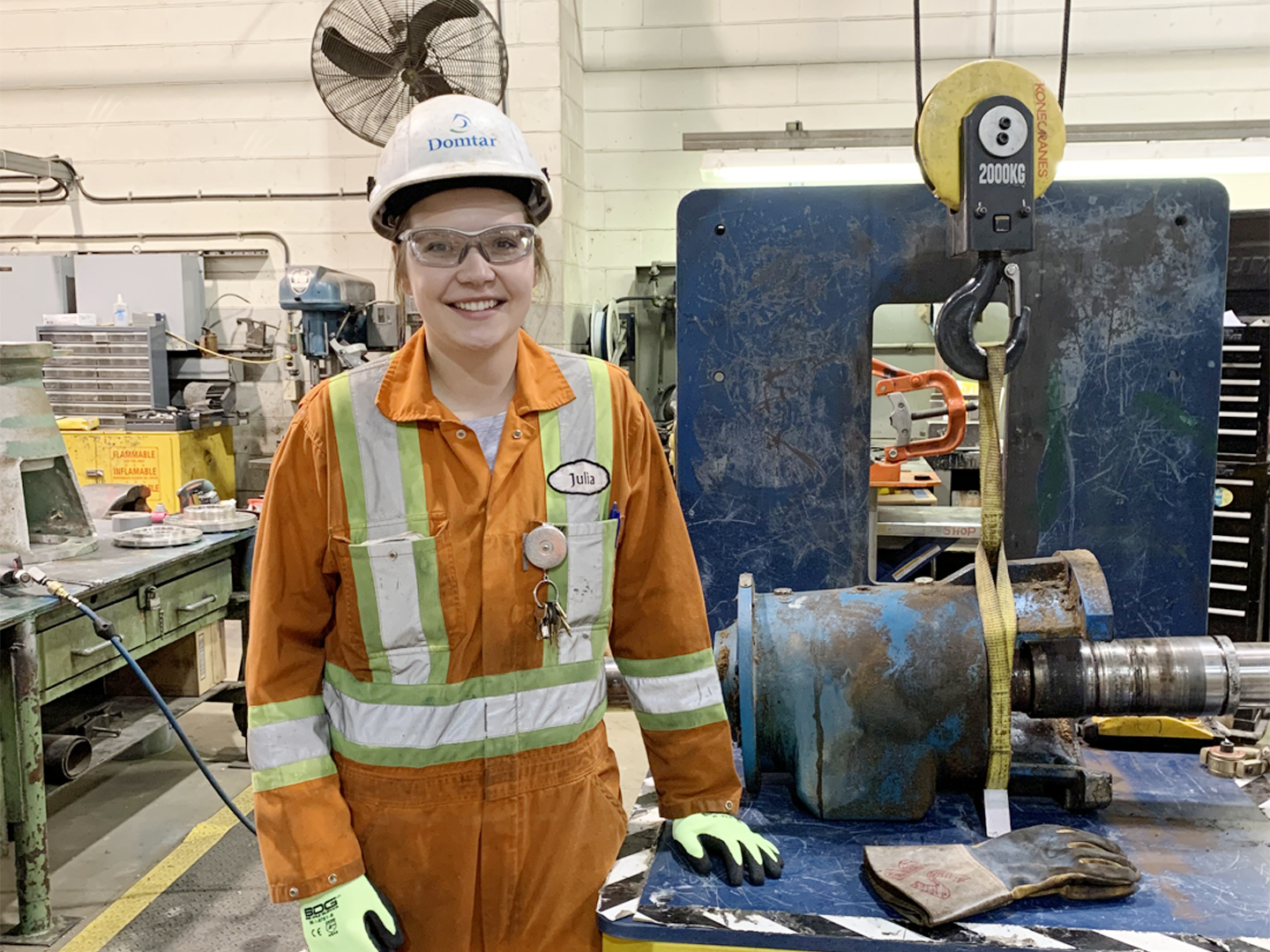 On International Women’s Day, we celebrate the women of Domtar — women like Julia Kocis who not only contribute to our success as a paper, pulp and packaging manufacturer, but also serve as examples for girls and young women beginning to think about their own careers.

Domtar President and Chief Executive Officer John Williams has often said our people are our competitive advantage. That includes Julia Kocis, a millwright at our Dryden Mill. She began working at the mill four years ago after completing trade school at Cambrian College in Sudbury, Ontario.

As a millwright, Kocis is a member of the team that maintains and repairs machinery. She and her colleagues keep our equipment running smoothly so it can continue producing the softwood pulp that our customers use to manufacture premium paper towel and tissue, as well as other consumer products.

“We maintain all the mechanical equipment in the mill to keep it in tip-top shape — or do whatever needs to be done to get it there,” Kocis says.

“I Wanted to Work with My Hands”

Julia Kocis’s journey into the trade started at an early age when she would work alongside her father, who makes his living as a marine mechanic in her hometown of Chatham, Ontario.

“I knew early on that I wanted to work with my hands,” she says. “I love it because I’m always learning and always finding new tips and tricks to do something differently or easier than before.”

Kocis found the Dryden Mill after trade school when she was seeking an apprenticeship, which she completed in March 2020. She says everyone was very welcoming and supportive, and she’s proud to work at the mill because of the way the mill’s leadership values employees’ skills and input.

Last year, Kocis became the Dryden Mill’s first-ever female millwright to earn Canada’s prestigious Red Seal certification, indicating that a tradesperson has demonstrated the knowledge required for the national standard in that trade.

One of her most important jobs comes during the mill’s scheduled maintenance outages, where she is part of a team responsible for precision pump maintenance, ensuring the pumps are rebuilt to factory specifications and perfectly aligned for worry-free operation between outages. This work helps prevent unscheduled downtime, which could result in lost production and lost revenue.

“It’s satisfying when you get [the machines] to run right,” she says. “I take a lot of pride in seeing the positive results of my work.”

Her supervisor, Jeff Park, says Julia Kocis is one of his most reliable millwrights.

“She’s as committed as they come, and she has incredible attention to detail,” Park says. “I never have to worry when I put her on a job.”

Kocis regularly participates in skills-based workshops, where she uses her passion to advocate for more women like her to explore a career in trades.

“Trades careers are great for people who are detail-oriented,” she says. “Being a millwright requires a lot of attention to detail to be successful.”

Her advice for others considering entering a career in the trades — especially women? Be confident. “You’re definitely capable of way more than you initially might think,” she says.