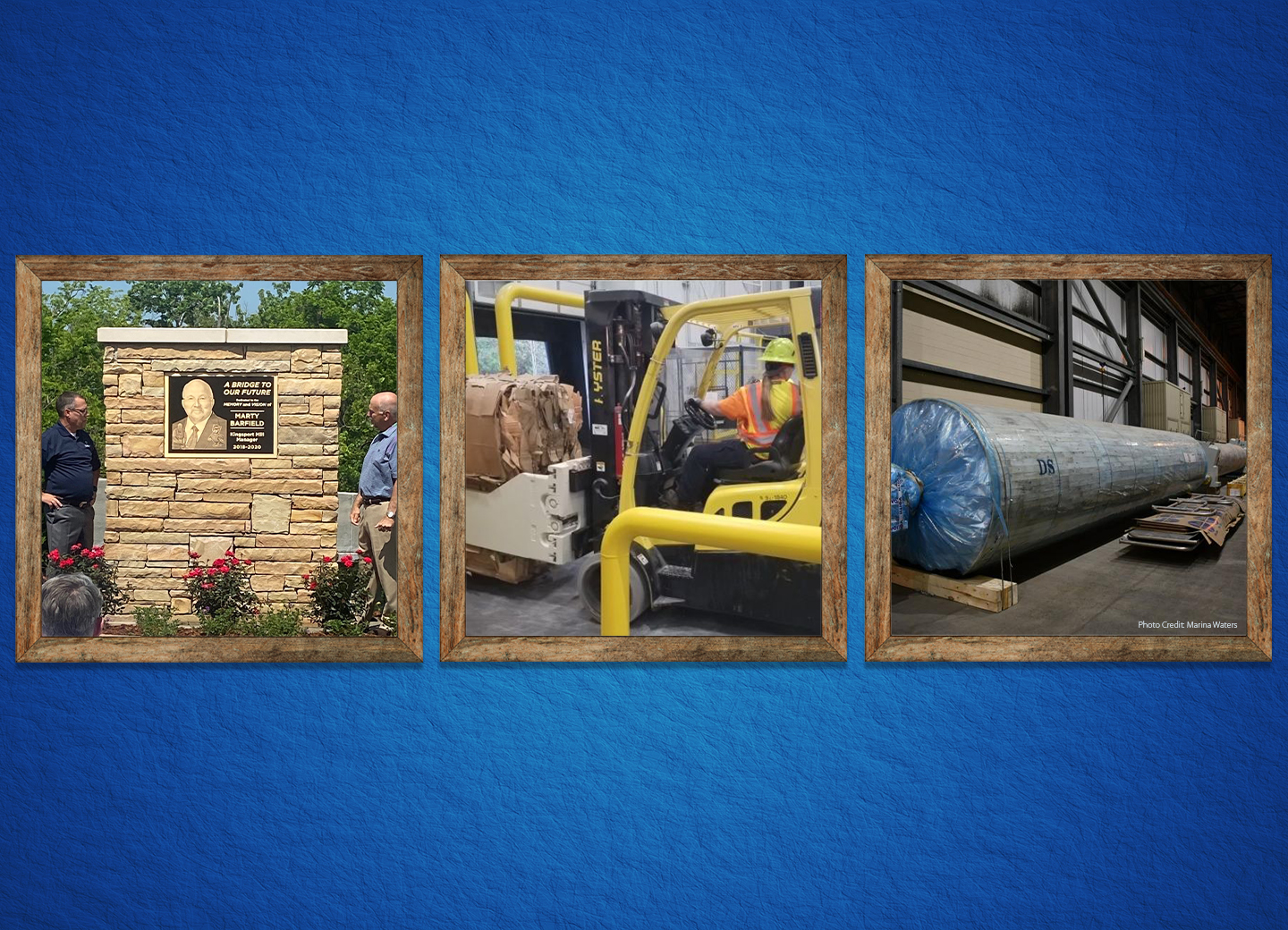 Bales, a boat and a bridge dedication have each played a part in the conversion of Domtar’s Kingsport Mill this spring, as the company has continued to meet important milestones on its way to machine startup.

The company’s first 100-percent recycled packaging facility should be completed by the end of the year and will use a bridge dedicated to the memory and vision of Marty Barfield, a friend, colleague and former mill manager who died in December 2020 after a long illness.

Dedicating the Bridge to the Future

In May, Domtar’s leaders held a bridge dedication ceremony at the site to honor Barfield.

As part of the project to convert the mill into our first 100-percent recycled packaging facility, the City of Kingsport and Domtar agreed to swap land parcels. Domtar received Cloud Park, where a hub is being created to route truck traffic to and from the mill and nearby interstate highway.

A crucial component is the new bridge over the Kingsport Greenbelt and Reedy Creek. The new location will be more convenient for large trucks entering and leaving the mill as they bring bales of recovered paper to the mill.

“We believe this structure is symbolically our ‘bridge to the future,’” Mill Manager Troy Wilson says. “It’s a perfect and meaningful way to honor Marty Barfield and his contributions to the mill. It represents his vision for the mill’s future and the positive influence he’s had on us all.”

Barfield enjoyed a 30-year career at Domtar. He was named Kingsport Mill manager in February 2019 and was instrumental in getting the mill’s packaging conversion project approved and launched. He was also the key architect behind the new operational work design.

His family, friends and colleagues, as well as Domtar President & CEO John Williams and other company leaders, traveled great distances to attend the event and enjoy a barbeque lunch — Barfield’s favorite.

In April, the team received its first bales, made up of retail boxes and other mixed paper such as cereal boxes, office paper and newsprint. These will be stored until the mill starts producing 100-percent recycled containerboard by the end of the year.

The delivery was the first of many to come. Each year, the mill will use about 660,000 tons of recovered paper to produce new recycled packaging products to serve independent corrugated converters.

In March, supply chain issues threatened to delay the team’s conversion schedule. Some out-of-the-box thinking kept the project on track.

The prospect of getting 43 dryer cans and other crucial equipment from the Dalian port in China to the mill in Tennessee presented a potential three-to-six-month schedule delay because of global shipping and supply chain backups.

This could have cost millions of dollars in lost earnings potential for the company. To ensure that didn’t happen, the mill team decided to rent its own boat — actually, a large ocean freighter — to take the load from China to the port in Charleston, South Carolina.

This not only brought the equipment to port more quickly, but also, after the ship arrived in port, it was able to unload immediately because it had cranes on board. In all, about 85 truckloads of equipment made its way from the port to the mill without delay.

“This project has given us an opportunity to demonstrate each of Domtar’s core values — innovation, agility and caring,” says Charlie Floyd, vice president of packaging capital. “And there’s more to come as we move toward completion and production.”