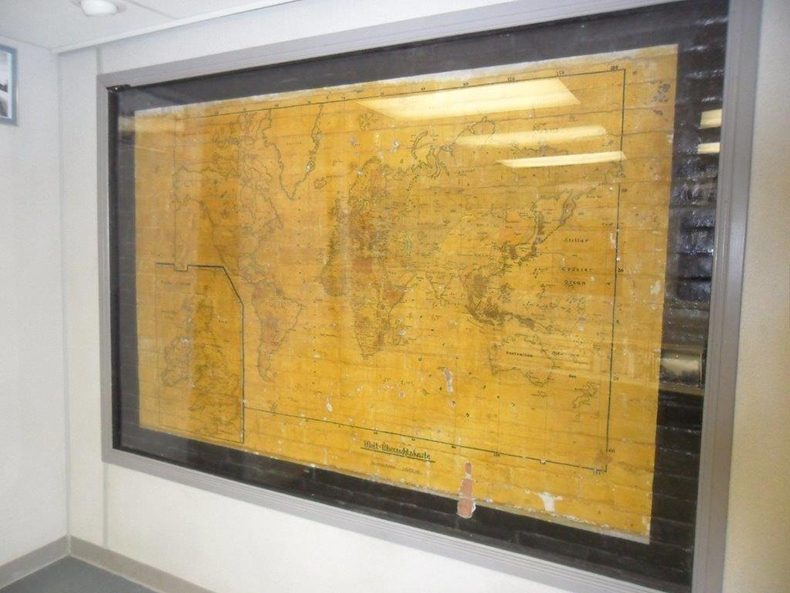 Located on the banks of Northern Ontario’s Spanish River in the Sudbury District, Domtar’s Espanola Mill has been in operation since the early 1900s. Today, it produces more than 200 different grades of technical and specialty papers, as well as high-quality northern bleached softwood kraft (NBSK) pulp. But what many people don’t know is that the building houses an interesting piece of history that reaches beyond its pulp and paper roots.

A map of the world drawn by a captured German navigator remains preserved at Domtar’s Espanola Mill. It’s a reminder of when the facility was a prisoner-of-war camp run by the Canadian Armed Forces during World War II.

During World War II, Espanola Mill was abandoned due to lack of work. Between 1940 and 1943, it was occupied by the Canadian Armed Forces and converted to house captured German soldiers who were brought to Canada from Great Britain.

The mill became a prisoner-of-war camp because it could accommodate large groups, and its inland location made escapes by sea more difficult. At one point, Espanola Mill held as many as 1,200 German soldiers, with guards assigned to watch over them.

One artifact from that time is still visible on a wall at the mill today: a map of the world that, according to a local historian, was drawn by a captured German navigator. It’s said that the man was a geography teacher and cartographer in his civilian life; he drew the map to scale from memory. He and his fellow prisoners then marked the map with country flags to track the war’s progress during their time at the camp.

The mill has since built a room around the map and preserved the artifact behind glass. Today the walls in the Map Room are decorated with photos of what the area looked like during the war, as well as photos of prisoners working around the camp and on the nearby highway.

Sarah Lachance, the mill’s onboarding specialist in charge of facility tours for new hires, says one of the most interesting photos in the Map Room shows prisoners waiting in line for the canteen, which was located almost directly adjacent to the Map Room. In fact, when looking at the photo, you’re very near the place where the photo was taken.

“If the walls weren’t there, you’d basically be standing outside the canteen,” she says.

For Espanola Mill employees, the Map Room is a fascinating part of the mill’s history and a perpetual reminder of Canada’s involvement in the war.

“It’s definitely a highlight of tours,” Lachance says, “especially if [participants are] excited about history.”

Domtar’s Paper Division: Who We Are