Working at Domtar: A Family Tradition 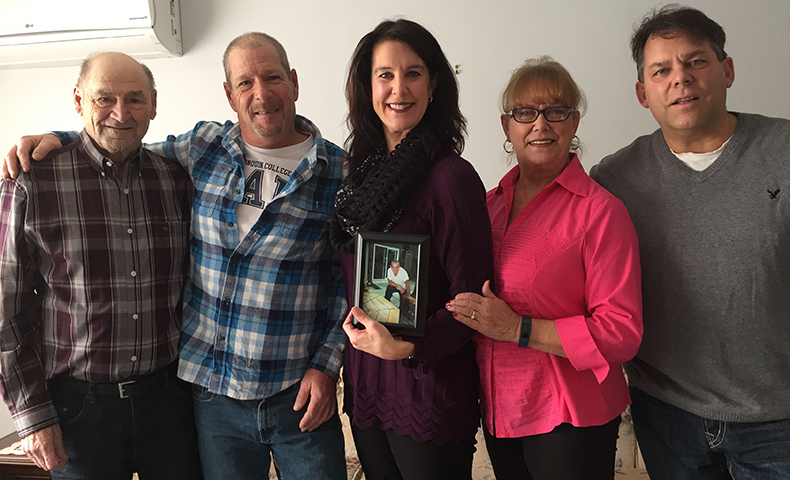 For some of our colleagues, working at Domtar is more than a job. It’s a family tradition that spans generations.

With roots going back nearly 170 years, including a long-standing presence in many North American cities and towns, you can visit nearly any Domtar location and find people following in the footsteps of a parent, a grandparent, an aunt or an uncle. These generations may even be working alongside each other.

For these colleagues, working at Domtar is more than just a matter of convenience. It’s a family tradition and a way of life. We take it as a compliment to our company culture.

“When you have an industry in a small community, many children grow up wanting to work where their parents work,” says Brenda Meloche-Gagné, a human resources senior advisor at the Espanola Mill. “We have many common names in our Espanola Mill. Personally, I was very excited to begin my career at the mill. My mother, Pearl Meloche; my father, Peter Meloche; and my brother, Brent Meloche, were already working, along with my husband (boyfriend at the time), Ray Gagné, and his father, Joe Gagné. Ray’s brother and sister also worked a few years as summer students. This mill has provided many opportunities for families in our community.”

Here are a few stories of colleagues who have made a family tradition of working at Domtar.

“I knew I would make a career here.”

In November 2017, after 35 years of work, Marc Cloutier retired from his job at the Windsor Mill. He was the fourth generation to work at the facility, and he hopes he won’t be the last. His son, Antoine, recently started an internship that Marc hopes will evolve into a full-time job, making Antoine a fifth-generation Domtar employee to follow family tradition.

“Since I was two, three, four years old, I always heard about the mill, so I knew coming in that I would make a career here,” Cloutier says. “They’re a very good employer. Conditions are good, safety is good. Why not work for the best?”

“It’s one of the best jobs someone can have.”

When Rich Koehn joined the Port Huron Mill as a laborer in 1992, he had a similar impression thanks to his dad Chris, who worked there for 38 years. Rich soon discovered what kept his dad there his entire career.

“I thought it was an assembly line where people stayed in one place all day,” he says. But then he toured and quickly saw why his father enjoyed working for Domtar all those years. It was a collaborative and positive environment where people look out for one another.

“The family atmosphere at this mill is unbelievable,” he says. “I love working here.”

Koehn also says working at the mill was exactly the kind of steady employment he needed as a newly married young father looking to support his family. “In this area, it’s one of the best jobs someone can have,” says Koehn, who attributes Domtar’s reputation as a great employer to the pay, the company’s commitment to safety and its caring culture.

Koehn, who worked his way up to his current position as team lead on two paper machines, isn’t the only member of the family to follow in his dad’s footsteps. His brother Doug retired in 2015 after 36 years at the mill. His nephews John and Mike (Doug’s sons) currently work at the mill.

“I told them, ‘You’re not going to find a better job with better pay,’” he says. “It’s just a great place to work.”

Christer Kylefjord feels much the same. He’s one of five members of his family who currently work at Domtar’s Aneby, Sweden, plant. His son Jimmy is a process operator; his brother-in-law Jonas, his daughter-in-law Martina and his nephew Joakim are machine operators.

Christer started at the plant in 1999 as a machine operator and today works as a spare parts operator. He likes that the work is never the same from day to day. He says it’s a great place to work with nice people and an excellent commitment to safety.

His nephew Joakim has been a machine operator at the Aneby plant for about 18 months. When Joakim’s previous manufacturing job left for Poland, he turned to Domtar after hearing a lot of good things from his Uncle Christer. Joakim says no two days are the same, and he enjoys the collaborative environment where everyone works together to solve problems. That collaboration, he says, has brought about many improvements in the past year because it’s a safe environment where people feel comfortable expressing opinions or giving ideas without fear of criticism.

Of course, these are just a few examples of the many fascinating stories of how working at Domtar has become a family tradition, with the company woven throughout each family’s history. With our ongoing commitments to sustainability, innovation and community outreach, there are plenty of opportunities for future generations to thrive at Domtar together.

Take a look at some other colleagues who have created a family tradition of working at Domtar.

Michael Spears, A62 paper machine fourth hand at the Ashdown Mill, with his mother, Robin Bond, an accounting payroll clerk.

Alondria Hamilton, an accounting billing specialist at the Ashdown Mill, with her dad, Clyde, a pulp mill employee.

Archie Conroy (front), a janitor and 20-year employee at the Kamloops Mill, with his son Brady (right), a process technician who began at the mill in 1982, and his two grandsons: Jonathon (left), a steam plant worker since 2015, and Philip, a first aider at the mill since 2017.

Jeannine Jaccard, a nurse at our Kamloops Mill from 1978 to 1993, with her son Mike (left), an instrument mechanic and 39-year employee, and his son Chris, an electrical engineer since 2013.

Victor Ramunno (right) worked at our Kamloops Mill for 41 years before retiring in 2017, and his son, Jason, has been an electrician since 2007. Both followed in the footsteps of Victor’s father Pasquale (Pete), who worked at the mill for 31 years as a mason.

Tyler Bennett (left) and his father, Terry Bennett, of the Kingsport Mill. Their relatives Bill Bennett and Donnie Bennett also worked at the mill in the mid- to late 1900s.

Bobby Goad and his father, Ralph Goad (pictured below), worked more than 75 years combined at the Kingsport Mill.

Ralph Goad began his career in the wood yard at our Kingsport Mill in 1946 after returning home from World War II. His son, Bobby Goad (pictured above), now works at the mill.

(From left) Dusty Price with his father, Larry Price, and brother, Derek Price, all of the Kingsport Mill.

Chris Roberts (left) and his son, Daniel Roberts of the Kingsport Mill. Chris’ grandfather, F.M. Christian, also worked at the mill before retiring in the 1970s.

Noah Walker (left) and his father, Jeff Walker, of the Kingsport Mill.

(From left) Willie Cattanach, a machine shop maintenance supervisor, retired from the Nekoosa Mill with 42.5 years of service. His brother, John Sr., retired from the mill after 37.5 years as a senior kraft mill pipefitter and relief supervisor. John Sr.’s grandson, Grant Keyzer, has worked at the mill for six years as a recovery boiler helper. Grant’s mother, Joanne Keyzer (John Cattanach Sr.’s daughter), is a training coordinator with 38 years of service. Finally, John Cattanach Jr. (John Sr.’s son, Joanne’s brother and Grant’s uncle) is a No. 9 machine tender with 35 years of service at the mill.

John Cattanach Sr. (back row left in his moose sweater) is shown with his father Harry, who worked in the boilers at the Nekoosa Mill for a short time before opening Cattanach’s Grocery Store. John’s brother, Willie, is on the far right. Harry’s sister, Ramona Fredrick, also worked at the mill for 35 years in the finishing room.

Scott Gokey, R5 machine tender has worked at the Rothschild mill for 30 years. His daughter Janelle joined the team three years ago and is an engineering and maintenance administrative assistant.

William Szews, pulp ARE has worked at the Rothschild mill for one year. His brother Alex is an apprentice pipefitter with 11 years of service. They followed in the footsteps of their father Bill a journeyman machinist with 35 years of service.

(From left to right) An Espanola family tradition: Joe Gagné retired in 1995 as a pulp drying foreman after 37 years of service. His son, Ray Gagné, was hired in 1985 and is a heavy equipment operator in the wood yard. Ray’s wife, Brenda Meloche-Gagné, is a senior human resources advisor who joined the mill in 1990. Brenda holds a photo of her father, Peter Meloche, who worked in maintenance at the mill and retired in 2001 after 21 years of service. Brenda’s mother, Pearl Meloche, retired in 2001 as a human resources administrative assistant after 21 year of continuous service, with prior service of an additional eight years. Finally, Pearl’s son and Brenda’s twin brother, Brent Meloche, was hired at the mill in 1987 and works with Brenda’s husband, Ray, as a heavy equipment operator in the woodyard.

Leroy Wettstain (middle) with his son, Brian Wettstain (left) and his step son, Ryan Hamilton (right), of the Hawesville Mill.

How Much Do You Know About … Pulp? Take Our Pulp Quiz

New Initiative to Educate Consumers About Paper and Sustainability