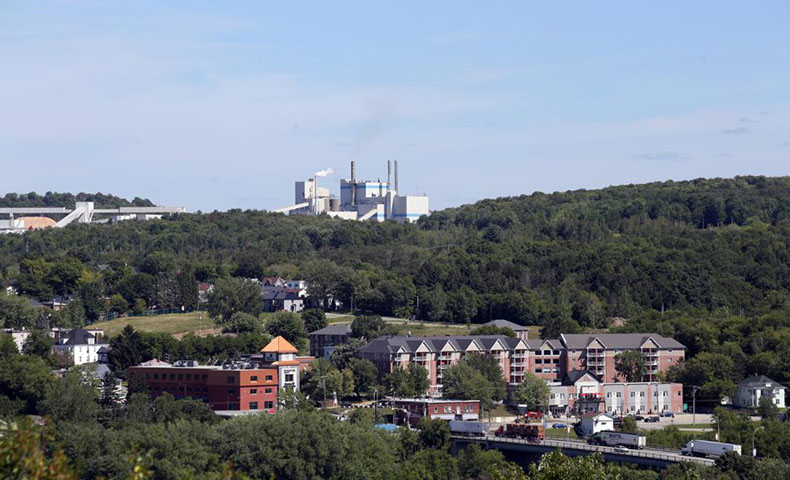 If you’ve been to Windsor, Québec, then you’ve probably seen the Domtar paper mill that sits atop the hill. Our Windsor Mill has been a fixture in the town for 155 years, marking more than a century and a half of pulp and paper manufacturing as well as a longstanding partnership with the community of Windsor.

The mill was established in 1864; Canada didn’t become a unified country until 1867, making the mill three years older than the country in which it operates. But don’t let its extensive history of pulp and paper manufacturing fool you. Windsor Mill is anything but antiquated. It’s an ultra-modern facility boasting sustainable, high-tech forestry management techniques such as drones, precision tree-harvesting, cellulose nanocrystal innovation and a waste-free circular economy.

Pulp and Paper Manufacturing in Windsor

The original mill was built by Angus, Logan & Co. in 1864 and went through a few different owners before Dominion Tar — later known as Domtar — acquired the mill in 1961. In the 1980s, the mill underwent a large $1.2 billion expansion and renovation project, which resulted in a newly-constructed state-of-the-art mill for pulp and paper manufacturing. The old mill was eventually demolished.

Today, Windsor Mill produces bleached hardwood wet-lap market pulp and uncoated freesheet paper, and it manages 400,000 acres of forestland in the region surrounding the mill, all certified to Forest Stewardship Council®, Sustainable Forestry Initiative® and ISO 14001 standards. The majority of forests that Domtar sources from are controlled by outside parties, but in this case the mill actually owns the land. Only 15 percent of the wood the mill procures comes from private landowners.

Owning the land gives the site’s foresters greater control over how they manage it. In addition, the mill shares its forests with several fishing, hunting and hiking clubs and contributes to the economy by leasing property and trees for maple syrup production. The land also offers countless outdoor experiences for visitors from the surrounding towns and is open to all nature enthusiasts.

“The mill defines who the town is and gives it personality. People are very proud to work for the mill, and while I was mill manager there I knew of fourth- and even fifth-generation mill employees,” says Eric Ashby, Domtar project manager and past Windsor Mill manager.

“It is the only mill that has never changed ownership since it was built,” Ashby says, referring to the current mill built in the 1980s. “People are proud to be a part of the mill and proud that it is a part of the community. The mill is surrounded by a very strong sense of ownership.”

Sylvie Bureau, mayor of Windsor, added, “It is a pleasure to collaborate with Domtar. Domtar is a bonus for our community on the economic, environmental and community levels.”

The Windsor Mill supports more than 900 local pulp and paper manufacturing jobs. It has an estimated annual regional economic impact of $2 billion and is the largest employer in the town of Windsor. “We have a very good relationship and collaboration with all the municipality officials. It is important for us to share resources to the benefit of the community,” says Sylvain Bricault, Windsor Mill’s general manager.

Providence Cloutier, Domtar regional communications manager, was born and raised in Windsor. “With its 155-year history, it is hard to imagine what this town would be like if the mill never existed,” says Cloutier. “The mill is such a staple in the community and has been here for generations. Nobody knows what it was like to live here before the mill.”

“I remember growing up, we could see the Domtar chimney from my childhood home. Each morning before leaving for primary school we would look at the smoke coming out of the chimney to see if it was going to rain that day or not. It is an old tale that if the smoke blows to the left, then it will be a rainy day. I know it isn’t scientific, but as kids, we thought it to be the absolute truth. That is just one small, but fun, example of how the mill is ingrained into everyday life in the community.”

Windsor was home to Abenaki First Nation people in the 1600s and didn’t become more populated until the early 19th century when land was granted to English and French settlers for their service to the crown. In 1864, two innovative industries settled in Windsor: Canada’s first chemical pulp mill and the first black powder mill in Québec.

As a result, this small town — which is named after the house of the royal family in the United Kingdom — counts generations of papermakers among its 5,300 inhabitants. While black powder is now just a memory in the town, pulp and paper manufacturing (specifically at our Windsor Mill) continues to play a dominant role in both the landscape and the economy of the town.

The area is also a popular holiday destination as it’s surrounded by nature. Many residents and visitors enjoy Windsor for its natural beauty, parks and nature trails. That is why the town’s population greatly appreciates the emphasis Domtar puts on sustainable development.

Watch the video below to see a photo slideshow on the history of the Windsor Mill.

A Healthy Workplace is a Safer Workplace