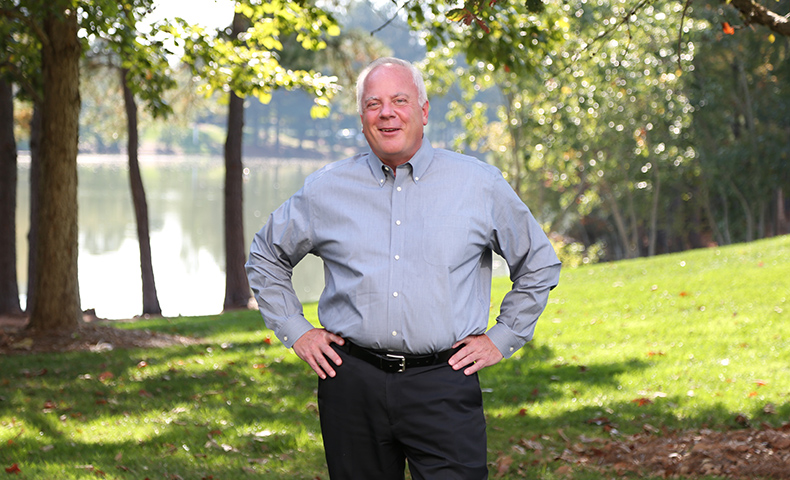 In the summer of 1975, Tom Howard was an ambitious 18-year-old intern on Capitol Hill when he rolled up his sleeve to give his first pint of blood to the American Red Cross. Today, more than four decades later, Howard has donated 205 pints of blood, but he still doesn’t like needles.

“It’s taken 130, maybe 140, pints for me to get used to the needle,” says Howard, Domtar’s vice president of government relations. “I still get a little nervous, but it’s my obligation to society. We all have an obligation to make our communities, our country, our world a better place.”

Howard, who works at Domtar’s Fort Mill, South Carolina, office, is a seasoned volunteer and a generous donor to many causes, from his service in the U.S. Coast Guard to his work for several nonprofits. But he has the most history with the Red Cross, and he visits his local Red Cross chapter every eight weeks.

The Red Cross estimates that a pint of blood has the potential to save up to three lives. The math suggests that Howard’s blood donations have helped hundreds of people.

“If I’ve made a difference in one life, it’s been worth it,” says Howard, who has worked with Domtar since 2001. “Or maybe my blood has been sitting unused on a shelf. Even still, if I’ve helped ease the stress of a doctor knowing that it’s there if needed, that’s worth it as well.”

At what point in your life did you recognize the value of giving back to your community?

It all started when I was 14 and I volunteered on the campaign of Margaret Chase Smith, the first woman to be considered for nomination for the presidency by a major political party. She was also the first woman to win election to both the U.S House of Representatives and the U.S. Senate. She represented Maine, where I’m from. I realized early that volunteering in any capacity, whether that is with a nonprofit, running for school board or sitting on city council, provides plenty of rewards.

Is there any one act of giving that makes you most proud?

I’ve learned so much, and received so much, from all of the community service work I’ve done. One of my proudest accomplishments is my service to our nation. I recently retired as a Chief Petty Officer of the United States Coast Guard and Coast Guard Reserve with 28 years of service. I was recalled during Hurricane Katrina, the first Gulf War and several other periods. I was honored with several medals, awards and accolades throughout my years of service.

You visited the White House recently to fight for citizens’ right to choose how they receive information, whether via email or paper. Why?

The federal government is taking action to deliver personal information to citizens only by electronic means, which would disenfranchise a significant number of citizens. About 30 percent of our population has no access to broadband, and that figure is higher among senior citizens and minorities. This is an important issue to Domtar because we want to make sure that everyone has equal access to information and that they maintain the right to choose how such information is delivered. This includes paper copies when people want them.