What are the most common causes of global deforestation? The answers might surprise you.

The Food and Agriculture Organization of the United Nations (FAO) defines deforestation as the conversion of forests to another land use or a permanent loss of forest cover. Deforestation is not a major issue in North America. In fact, in the United States, net total forest area has actually increased in the past 60 years, while in Canada, forest cover remains stable. However, this is not the case in other regions of the world, where the rapid loss of tree cover has reached alarming rates.

Despite the fact that the pulp and paper industry is not a major contributor to deforestation in many regions, myths continue to persist about the role our industry plays in this growing problem worldwide. That said, consumers who purchase pulp and paper products without considering the source drive demand in regions where less sustainable practices are common. Consider Indonesia, a country identified by several environmental organizations as a hotspot for deforestation related to the pulp and paper sector: 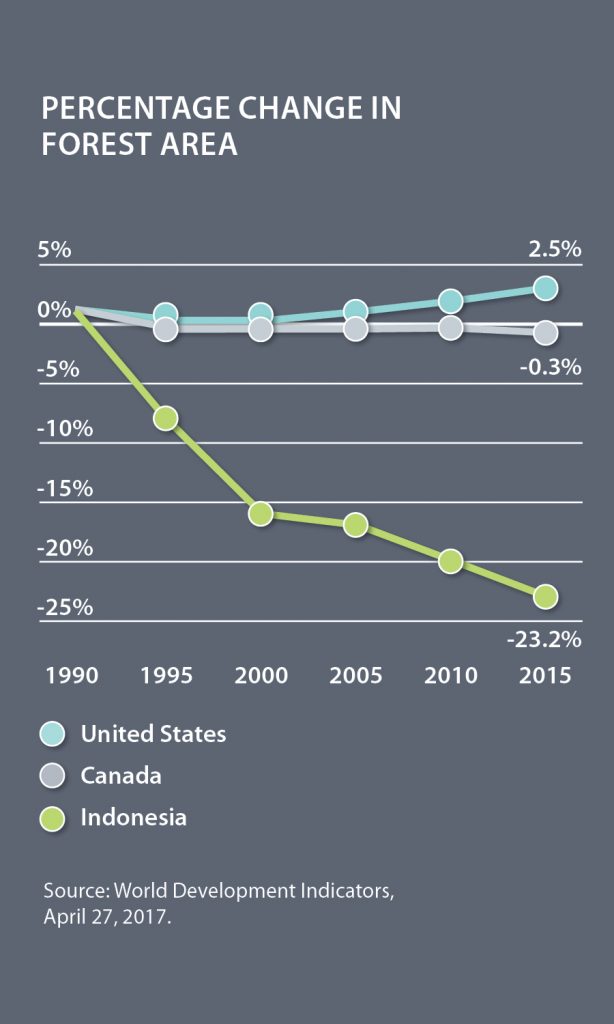 Aside from irresponsible logging practiced abroad, other major drivers of global deforestation include:

According to the Rainforest Alliance, agriculture drives 80 percent of tropical deforestation. A major culprit is palm oil, which is found in everything from cosmetics to food. In fact, the World Wildlife Fund estimates that more than half of all packaged products contain palm oil, including:

Unfortunately, the great demand for palm oil has driven producers to clear native forests in Asia, Africa and Latin America in order to create massive palm oil plantations. The result is a high rate of global deforestation that has proved devastating to local environments.

The FAO has found that agriculture is “the most significant driver of global deforestation.” That includes livestock production. Studies have shown that deforestation caused by beef production is more than twice that caused by the combined production of soy, palm oil and wood products. This is largely due to a growing global middle class with an increasing demand for meat products. High demand has led to unsustainable practices, such as the conversion of tropical forests to grazing lands.

Growing deforestation rates in the Amazon have been linked to mining. Research has found that mining in Brazil caused nearly 10 percent of all Amazon deforestation between 2005 and 2015 — much higher than previously thought. This is largely linked to demand for extractives like iron ore and bauxite, which are used in the manufacture of thousands of everyday products.

At Domtar, sustainability is about working smart for the long term, and when necessary, working on issues that go beyond those directly related to our business and our industry. By encouraging consumers to know where their paper comes from, as well as the global impact of other everyday purchases, we can help ensure that our forests remain healthy and productive for generations to come.

To learn more, read our 2017 Sustainability Report, “Working Smart for the Long Term.”