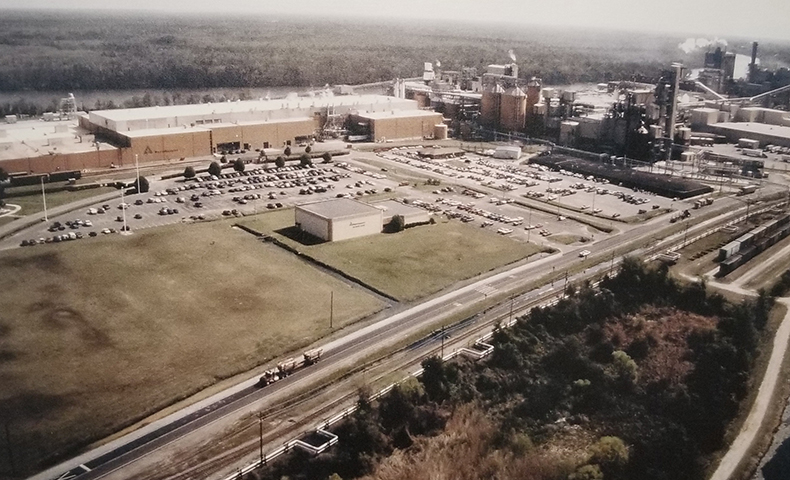 We’re proud to be a part of the communities where our employees live and work, including Plymouth, North Carolina. Our Plymouth Mill has played an important role in this historic mill town, driving the economy as the area’s largest employer and changing with the times. It also offered an area first in leadership diversity.

The Plymouth Mill was originally known as the North Carolina Pulp Co. It was built in 1937 by brothers John W. and Herbert Kieckhefer of the Delair, New Jersey-based Kieckhefer Container Co.

As the prospect of a second world war loomed on the horizon, the two became increasingly nervous about the stability of their pulp wood supply from Scandinavia. They toured the southern United States to secure their own supply and settled on Plymouth, North Carolina. Abundant stands of pine and a convenient shipping location about 100 miles from the mouth of the Roanoke River made Plymouth an ideal mill town.

In fact, the mill is still one of nearby Port of Virginia’s largest exporters, shipping more than 300,000 air dried metric tons from the port each year to 21 countries around the world.

The mill and the mill town grew throughout the 1940s as Keickhefer Container Co. expanded across the United States to keep up with increasing demand. In 1957, the company merged with Weyerhaeuser, and by the 1970s, the Plymouth Mill had grown into one of Weyerhauser’s largest east coast operations — a fully integrated five-machine facility manufacturing a wide range of products, including fine paper, fluff pulp and corrugated medium.

In 2007, Domtar merged with Weyerhaeuser’s fine paper business, making us the largest uncoated freesheet manufacturer in North America and a leading manufacturer of market pulp. Today, our Plymouth Mill produces softwood fluff pulp, known for its excellent absorbency and used in the production of adult incontinence products, baby diapers and absorbent hygiene products sold around the world. Providing jobs to more than 330 people (some of whom are third- or fourth-generation employees), Plymouth Mill is the largest employer in Washington County, North Carolina, a position it has held since its inception more than 80 years ago.

Plymouth’s economy was mostly based on agriculture long before the mill brought thousands of new jobs to the area — not just at the mill itself, but also at related businesses and satellite industries that were established in and near the mill town.

“The Plymouth Mill is a massive primary economic driver in Martin and Washington counties,” says Curtis Potter, Washington County manager. “It has brought many people to the area over the years who are connected to the mill — directly or indirectly — and it continues to employ folks who contribute to our local economy.”

Potter is also quick to point out the mill’s reputation as an excellent corporate citizen in this historic mill town — from its long-standing partnership with Plymouth on training emergency services personnel to donating thousands of dollars and volunteer hours to community causes, including the restoration and beautification of the Roanoke River and green space in downtown Plymouth. Each year at Thanksgiving, the mill partners with local social services in Washington and Martin counties to collect donations to ensure the less fortunate have food for the holiday. They also conduct a similar annual effort with Toys for Tots during the Christmas season.

“The mill is a symbol of pride for this community, even for people who have never worked there but have lived in the area all their lives,” says Everick Spence, mill manager. “As the first person of color to manage the mill, I have met many people in the community who are aware of my work and say they never thought they’d see a person of color lead the mill in their lifetime.”

Learn more about our Plymouth Mill and the mill town of Plymouth, North Carolina: