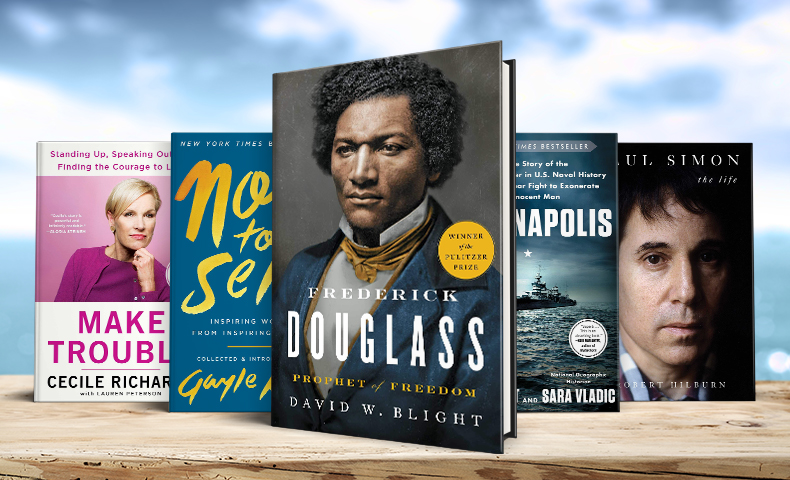 As summer approaches, make some time for reading. We’ve got five new titles printed on Domtar paper that highlight newsmakers or historical events and characters. Learn something new or be inspired by adding these personal stories to your summer reading list:

In this remarkable Pulitzer Prize–winning biography, David Blight has drawn on new information held in a private collection that few other historians have consulted, as well as recently discovered issues of Douglass’s newspapers. Blight tells the fascinating story of Douglass’s two marriages and his complex extended family. Douglass was not only an astonishing man of words but also a thinker steeped in Biblical story and theology. There has not been a major biography of Douglass in a quarter century. David Blight’s book gives this important American the distinguished biography he deserves.

Note to Self: Inspiring Words From Inspiring People

“CBS This Morning” cohost Gayle King shares some of the most memorable letters from the broadcast’s popular segment of the same name. With essays and personal stories from such varied figures as Oprah, Vice President Joe Biden, Chelsea Handler and Maya Angelou — as well as poignant words from a Newtown father and a military widow — this book is a moving reflection on the joys and challenges of growing up.

Indianapolis: The True Story of the Worst Sea Disaster in U.S. Naval History and the Fifty-Year Fight to Exonerate an Innocent Man

A sweeping saga of survival, sacrifice, justice and love, this book stands as both groundbreaking naval history and a spellbinding narrative — and it brings the ship and her heroic crew back to full, vivid, unforgettable life. It is the definitive account of one of the most remarkable episodes in American history.

Over the past three years, Hilburn has conducted in-depth interviews with scores of Paul Simon’s friends, family, colleagues and others — including ex-wives Carrie Fisher and Peggy Harper, who spoke for the first time — and even penetrated the inner circle of Simon’s long-reclusive muse, Kathy Chitty. The result is a deeply human account of the challenges and sacrifices of a life in music at the highest level. In the process of telling these personal stories, Hilburn documents Simon’s search for artistry and his constant struggle to protect that artistry against distractions — fame, marriage, divorce, drugs, record company interference, rejection and insecurity — that have derailed so many great pop figures.

Make Trouble: Standing Up, Speaking Out, and Finding the Courage to Lead — My Life Story

From Cecile Richards — president of Planned Parenthood Federation of America and the Planned Parenthood Action Fund for more than a decade, daughter of the late Governor Ann Richards, featured speaker at the Women’s March on Washington, and a “heroine of the resistance” (Vogue) — comes a story about learning to lead and make change, based on a lifetime of fighting for women’s rights and social justice.

All descriptions of these personal stories were adapted from Amazon.com.

Working at Domtar: A Family Tradition