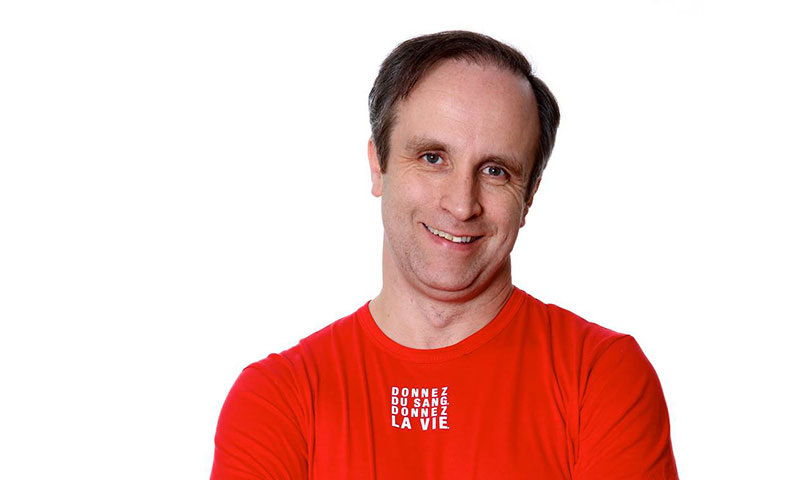 Patrick Duchesneau is a giver — of volunteer hours, of airplane rides, and of goodwill. But until five years ago, there was one thing he refused to give out of sheer fear: blood.

“I heard that when you give blood the needles are bigger,” said Duchesneau, who began working with Domtar 22 years ago. “I want to always help people in any way, but I have to hurt myself? Nah. But then the lady called me a sissy, so I tried it.”

The lady was a volunteer at a Domtar-hosted blood drive in 2012. Since then, the now-49-year-old Duchesneau has donated 147 pints of blood to the Hema-Quebec Blood Bank. His semimonthly visits have helped save thousands of lives. It’s just one of several ways in which Duchesneau gives back. Another is Ailes du Bonheur, a nonprofit initiative he started to give airplane rides to sick and disadvantaged children.

Tell us a little bit about yourself.

I was born in Quebec, and I moved to Montreal in 1993 for work. I began working with Domtar in 1995 as a contractor. In 2008, I joined the Domtar staff, and now I work as a manager for applications and technologies development.

What is Ailes du Bonheur?

Ailes du Bonheur [translated from French, “Wings of Happiness”] is a foundation I started to give airplane rides to sick and disadvantaged children. I like kids, so I created a legal entity for Ailes du Bonheur to fly kids for free. I’ve given 20 rides, which is not enough. I give the kids a certificate and wings so they can remember they did a flight with me. It makes me happy when people are happy. That’s it. That’s why I do it.

How did your love of flying develop?

When I was younger, my cousin and I were more like brothers. My uncle was a wealthy man, so when he would buy my cousin a jet ski or motorcycle or snowmobile, he’d get me one, too, so I could do all of those things with my cousin. The field we rode our motorcycles and snowmobiles on went by a very small airport. My passion for planes started then.

When I got older, I tried out to be a pilot in the Army, but I failed the eye exam dramatically. I still kept the dream alive by using flight simulators and playing flight video games. When my mother got remarried to a doctor, he informed me about a surgery I could have to correct my eyesight condition. Two weeks later, I went to the doctor’s office; six months later, I had eye surgery; and a year later, I started taking flight lessons. Today, I own my own airplane.

How else do you give?

I’m the least athletic man you could know, but I fell in love with running two years ago. It started when I bought a new smartwatch to help keep track of my business meetings. I decided to try it out running, and the next thing I know, I’m finishing my first marathon in six hours and one minute. I was so slow the volunteers were literally reopening the street behind me as I ran by so traffic could resume. But I kept running, and now two years and five marathons later, I’m going to try to qualify for the 2018 Boston Marathon. If I manage to qualify this summer, I’ve committed to raise money for my run to benefit the United Way Centraide. This is another way I am trying to inspire people.

After all the blood you have given, are you still afraid of needles?

Each time they insert the needle I always make the same grimace and the same sound. They always say, “Oh, Patrick, stop being a baby!”

It is in my nature to give, and I would feel bad for not doing my part to help others. I hope to lead by example. If I’m doing good, maybe I will inspire others to do the same.

How to Make Sustainable Choices for Back To School