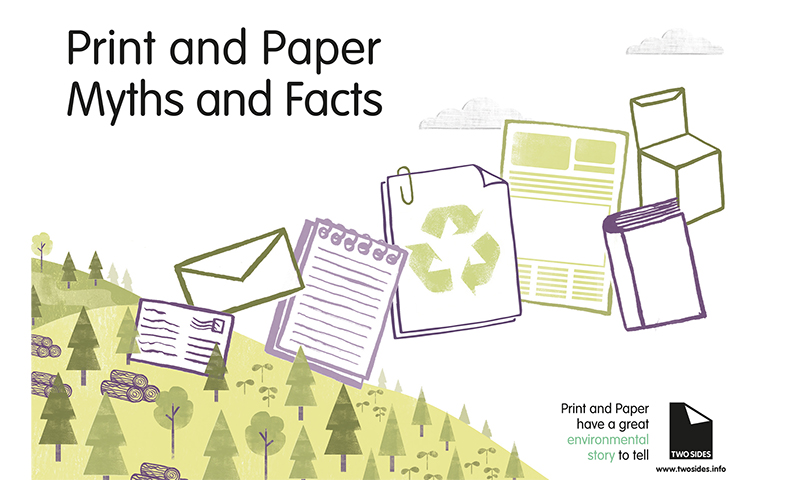 It’s time to debunk another popular paper myth, which says email is better for the environment than paper.

While sustainability-minded consumers often focus on the environmental effects of paper production, they should also understand the facts about electronic communication before declaring it a better choice. The updated report Print and Paper Myths and Facts by Two Sides North America offers important data about e-waste, chemical use and greenhouse gas emissions that result from the manufacture of computers and smartphones. This data includes the environmental effects of e-mail, text, social media and other electronic communications.

Domtar is a member of Two Sides, an independent, nonprofit organization that promotes the sustainability of print and paper. Members include businesses and nonprofits related to industries such as forestry, pulp, paper, inks and chemicals, prepress, press, finishing, publishing, printing, envelopes and postal operators.

We work with Two Sides to separate paper myth from paper fact, and to inform consumers about issues such as the limits of recycling paper and the increasing number of trees in the United States. In fact, we spoke with Phil Riebel, president of Two Sides, earlier this year about a 2017 survey that found people are concerned about the health effects of using digital media.

Worldwide, there are billions of smartphones, computers and other connected devices. Making these devices requires fossil fuels, chemicals, water and precious or rare earth minerals, as well as other components that are detrimental to the environment, such as lead, arsenic and mercury.

In addition, the world’s 3.7 billion email users send and receive more than 269 billion messages each day, according to some estimates. The carbon dioxide generated by a single email has been estimated at 4 grams; emails with attachments can reach 50 grams of carbon dioxide emissions. For the sake of comparison, a passenger vehicle emits 404 grams per mile. That means that every single day, email generates as much carbon dioxide as 2.66 billion miles of driving.

“With only 1 percent of the world’s greenhouse gas emissions, the value chain of pulp, paper and print is one of the lowest industrial emitters,” according to the Two Sides report.

When it comes to the sustainability of print and paper, it’s important for consumers to separate paper fact from paper myth in order to make an informed choice.

EAM Is Poised to Become a Leading Airlaid Nonwoven Supplier

The Battle Between Paper and Screen Time in the Classroom