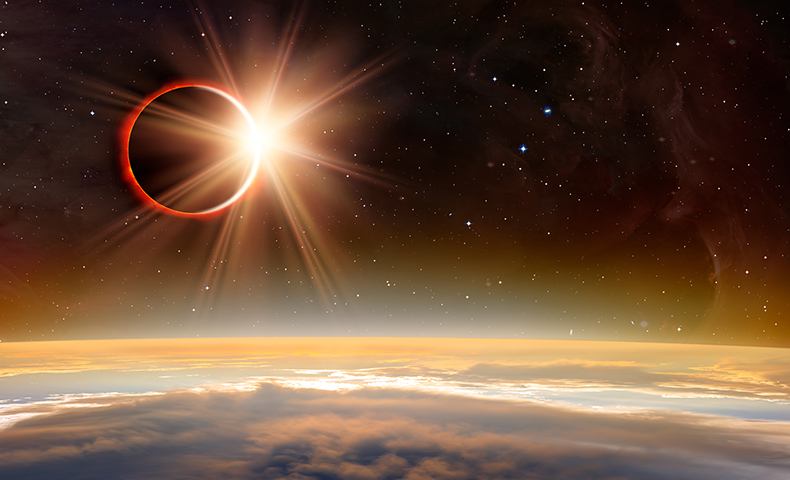 On Monday, Aug. 21, a total solar eclipse will be visible across the contiguous United States; the last such event was in 1918. As Americans turn their eyes toward the sky, paper eclipse glasses will play a big part in the viewing experience.

A total solar eclipse occurs when the moon passes between Earth and the sun, blocking the view of the sun. People standing directly in the moon’s shadow, or umbra, will see a black circle in the sky where the sun normally would be.

The moon’s full umbra will only be visible over a relatively small section of the country; just a swath of the United States, from South Carolina to Oregon, will experience the eclipse in its totality. But the moon’s lighter shadow, called the penumbra, will be visible all over North America, although the effect will be less dramatic for those locations furthest from the path of totality. Learn more about how solar eclipses work.

Solar eclipses are exciting, but they can also be dangerous. Scientists and doctors warn viewers not to look directly at a solar eclipse without proper eye protection. Unless it is blocked in some way, ultraviolet radiation from the sun can permanently damage your vision.

Several companies—some of which also make 3-D glasses for movie viewers—are selling disposable paper eclipse glasses. If you haven’t already purchased a pair from a reputable dealer, try contacting your local government to see if they can direct you to a local supplier. Many municipalities are selling paper eclipse glasses at public viewing events.

If you’re unable to get a pair of paper eclipse glasses, you can make a paper pinhole projector with a few simple supplies. It’s an indirect, but safe, way to see the phenomenon projected onto a paper surface.

If you don’t have access to either type of safety device, then your best option is to view the eclipse on television. Most binoculars and phone or camera lenses do not provide adequate protection against UV rays.

Astronomical Event of the Century

The 2017 total solar eclipse may end up being most photographed, most shared and most tweeted-about astronomical event to date. But it will also be a short event, lasting only about two minutes in locations that are in the direct path of the eclipse. Because the moon orbits the Earth so quickly, its shadow won’t cover any spot on the path of totality for very long. In fact, the eclipse will cross the entire United States in about 90 minutes.

Domtar colleagues at facilities in North and South Carolina, Kentucky and Missouri will see an eclipse with at least 95 percent of the sun obscured. If you’d like to see how close to total the eclipse will be in your area, take a look at this interactive solar eclipse map.

The good news? If you miss this eclipse because you don’t have the necessary safety equipment, you won’t have to wait a hundred years for your next opportunity. Another total solar eclipse will cover a different path across North America in 2024—meaning you have plenty of time to stock up on paper eclipse glasses.

Dryden Pulp Mill — A Great Combination of People and Location