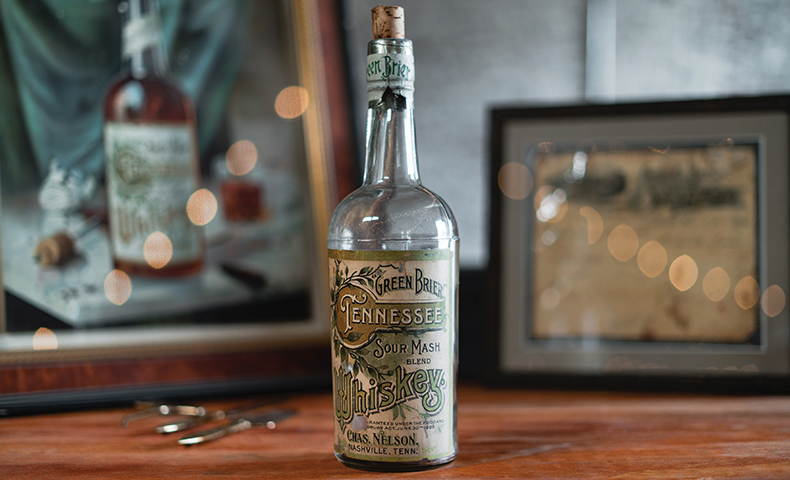 If it weren’t for paper archives, Nelson’s Green Brier Distillery would be nothing but a memory. The business, which dates back to 1860, was forced to close in 1909 when Tennessee passed a statewide prohibition law. For nearly a century, the brand lay dormant, remembered only in museums and family stories. But in 2006, a chance encounter with a paper label sent a new generation of Nelsons into the whiskey business.

Andy Nelson remembers the exact moment that set the family’s whiskey brand back in motion. Andy and his brother Charlie visited the Greenbrier Historical Society in Greenbrier, Tennessee, with their father. On display was the original whiskey bottle label used by their great-great-great-grandfather, Charles Nelson, during the early days of the distillery.

“That was really the aha moment for us,” says Andy Nelson. “Seeing the original bottles of Nelson’s Green Brier Tennessee Whiskey with our name on it — that’s when this became real.”

Thanks to paper archives and ephemera discovered during a period of intense research, the brothers were able to uncover exciting details about their family’s history in the whiskey business. Through the Tennessee State Library and Archives, the Stitzel-Weller Distillery Archives and other resources, they found a paper trail that included newspaper articles, advertisements, patent documents, trademark details, logos, labels, marketing materials and other papers containing information essential to the business.

One article provided clues to the family’s original whiskey recipe. Since photos weren’t abundant in newspapers during that time, articles often included extremely detailed accounts of places and people. A multi-page written account of a group tour through the distillery included important details about the distillery’s whiskey recipe and production methods. The recipe called, in part, for 103 bushels of corn to be cooked at 212 degrees, then cooled and combined with 28 bushels of wheat. These and other recipe details were all safely stored in the paper archives for the Nelsons to find more than a century later.

It was then that the dream of reopening the business started to look like it could actually come true. “After that [day], we wrote a business plan and started trying to raise money,” says Charlie Nelson. The business reopened three years later — exactly a century after it had closed its doors. In 2012, the brothers sold their first bottle of whiskey.

Another discovery in the paper archives was Charles Nelson’s obituary, which made a deep impression on the brothers and guides the company today. “His obituary is a big source of inspiration for me and Andy,” says Charlie Nelson. “It’s a testament to who he was.”

The brothers had heard many stories about the elder Nelson throughout their lives, but until that point, it seemed more like folklore. Seeing a printed account marking Charles Nelson’s life brought their great-great-great-grandfather’s spirit and drive into sharp focus. He led a colorful, hardworking life as an immigrant, and he was remembered as a charitable and considerate employer who recognized the value of his employees. The obituary said Nelson paid his workers “honest wages for honest work. If a man offered to work for $50 a month who, in Mr. Nelson’s opinion, was worth $100, he paid him what he was worth, not what he would take.” Charles Nelson’s legacy is a reminder of what can be achieved when you set your mind to it.

The paper archives also contained one of the most important pieces for bringing back the family brand — the original distillery logo and label design. From these gems, the brothers crafted the logo and label designs used today. In the early days of the mill, the letterhead was printed using the same typography as the United States Mint. Staying true to the brand’s legacy, the business’s letterhead and receipts use the same original designs Charles Nelson used.

The company’s marketing materials proudly embody the original brand, and the Nelsons would have it no other way. “If none of this stuff had been printed or published, we wouldn’t have found out about it, or at least not enough to be able to bring it back to life with the sort of thoroughness and detail that we have,” Andy Nelson says.

Charlie Nelson agrees. “The design only exists because of a real thing. None of it is a made-up story, and that is the great luxury we have. We don’t have to invent anything.”

Today, many of the documents, articles and designs that helped the Nelsons revive the family business now line the halls of the distillery and help share the brand’s legacy with all who pass through the doors. It’s a powerful reminder of the stories and inspiration simple print and paper are able to hold. Thanks to those paper archives, the Nelson brothers not only found the key to unlocking a piece of their past, but they also created a map for their future.

A version of this story originally appeared in Domtar’s Paper Matters magazine. Subscribe today to explore the world of print, design and paper.

Is Blockchain Technology the Next Step in Sustainability?