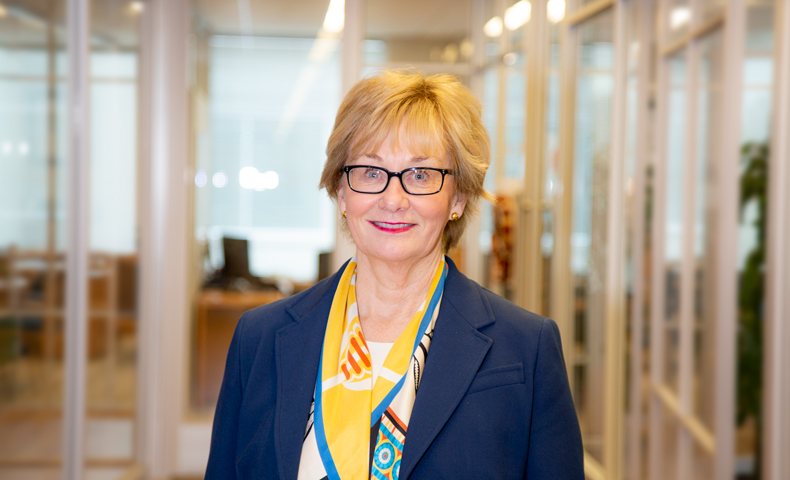 Are women catching up in the race for equality at the corporate leadership level? We asked one of our board members to share her thoughts on this as well as her experiences as a woman leader in a male-dominated corporate world.

Pamela Strobel, a member of our board of directors since 2007, has spent her career advocating for women, beginning as a young lawyer in Chicago in 1977. Strobel, who was named one of Fortune Magazine’s Most Powerful Women in 2002, currently chairs our human resources committee and is a member of our nominating and corporate governance committee.

While there is still work to be done, Strobel believes women are making corporate leadership gains.

Q: What is it like to be a woman in a mostly male corporate world?

A: There have been many times in my career when I have been the only woman in the room. Most of my working life has been in male-dominated organizations. I remember when I was a partner at my first law firm in Chicago. There were other women partners, but I was the first one to have a baby and continue to work.

When my son was born in 1986, I had a leadership role in the firm. Because I was the first female partner to have a baby, I had the opportunity to establish a maternity leave policy for our firm. I set out to develop a maternity leave that was three months long, fully paid. For the 1980s, that was very ahead of the curve.

At my first law firm, as well as the second firm I joined in 1988, I had many experiences working with clients who weren’t used to working with a woman. Sometimes I had the sense that they asked themselves, “Am I getting the A team here or not?” I felt that I had to be twice as good so my clients would not think that I was less skilled than my male counterparts.

Q: Did your upbringing impact your career path?

A: I was fortunate to be born into a family that values strong, independent women. My grandmother on my father’s side was the first woman to graduate with a degree in physics from the University of Illinois. She went on to get her master’s degree and then worked in Chicago as a researcher in the 1920s. My great grandmother was in the first graduating class from the University of Illinois that actually had women in it, back in the 1870s.

Both of those women’s legacies had a strong influence on my father and our family. He didn’t raise his daughters like princesses. We were taught early on that women can do anything just as well as men.

I remember my father telling me that he thought I would make an excellent lawyer because I reminded him of his father, who was a chief justice of the Illinois Supreme Court. Those words stuck with me and allowed me to dream big. In my family, I wasn’t breaking any barriers, and my parents never held me back from accomplishing my goals.

Q: Where have women recently made gains in corporate leadership?

A: I was recently listening to a radio interview with Gloria Steinem [the writer and political activist known for her leadership in the feminist movement], and she was saying how young women today are still unhappy about the inequality in the country and the world. I agree with Ms. Steinem that they should be, and I also agree with her that things are much better than they were 40 years ago.

I remember one frigid January in the late 1970s. Chicago had a snowstorm, and I had to go to court to represent a client. I chose to wear wool pants to stay warm. As I walked into the courthouse, the judge stopped the hearing that was taking place before mine and said, “Young woman, you are not permitted in my courtroom wearing pants.”

That would never happen in this day and age. So, when you compare these dramatic things, it is better. Am I content with where we are today? No, I am not. But things are obviously getting better. The numbers haven’t changed as quickly as they should have, but we are moving the needle.

Q: How is Domtar doing with having women in corporate leadership?

A: I would say we are moving in the right direction. There is clearly a concerted focus now to get women into corporate leadership roles. We are tracking recruitment and retention, and we are looking at employee surveys. Our efforts are being recognized by organizations that track gender diversity in corporate leadership.

I know what it means to be the only woman in the room. Sometimes in these situations, women can hold themselves back so as not to be judged. I’ve given myself a filter unconsciously when I’m the only woman in the room. But once there is another woman, and especially when there are three, you have critical mass, and your difference is not being thought of first and foremost.

I hope that the women in Domtar feel optimistic that the company is heading in the right direction, and that we as a board appreciate the importance of women and minorities in corporate leadership roles. I care so much about the women of the companies I serve, and I will do my best to continue to make this company a great place for women.

Year over year, Domtar continues to make strides in our inclusion practices. Recently, we were recognized by several organizations for increasing the proportion of female board members. These organizations include the State Street Global Advisors Gender Diversity Index, which was launched to track U.S. companies with high levels of gender diversity in leadership positions.

We were also honored in November at the 2019 Breakfast of Corporate Champions in New York for having a board with more than 30 percent female members, and we will soon be recognized at the 2019 Women on Boards National Conversation on Board Diversity and dinner in Charlotte, North Carolina, which celebrates and promotes gender parity on boards.

Additionally, Women Inc. this year will name all three of our female board members — Giannella Alvarez, Pamela Strobel and Mary Winston — among the 2019 Most Influential Corporate Directors.