Mr. Magazine Reveals the Future of the Magazine Industry 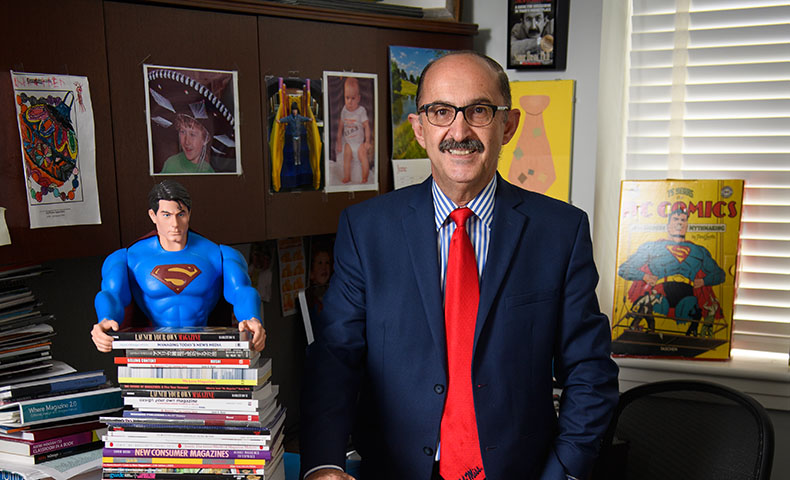 Dr. Samir Husni, the man behind the persona, is the founder and director of the Magazine Innovation Center at the University of Mississippi School of Journalism and New Media. He is also professor and Hederman lecturer at the school. Executives from most of the major publishing houses have consulted with Dr. Husni, and he’s regarded by many as the country’s leading magazine expert, making Mr. Magazine the go-to authority on periodicals that are published and printed on paper.

We spoke with Mr. Magazine about the exciting evolution of the medium — from the emergence of short-run niche publications to the shift among digital brands toward using print to connect with customers.

Mr. Magazine on the Allure of Print

“If it’s not ink on paper, it’s not a magazine,” Dr. Husni declares. He rejects the idea that blogs, lifestyle sites or content aggregators qualify as so-called digital magazines. Instead, he draws a line between magazines and magazine media — the various digital content-delivery satellites that orbit a brand. Ultimately, he challenges anyone to find a definition of “magazine” that doesn’t involve print.

Dr. Husni is known for telling his students, “The day you’re happy with a virtual boyfriend or girlfriend, let me know.”

For Mr. Magazine, print is the only reality. He talks about the human desire to own things and the need to lose oneself in the reading journey. “With digital, we search for something specific,” he says. “There’s no element of surprise. With a magazine, I may be interested in a cover story, but then all of a sudden … ‘Oh, wow! There’s an article on inkjet printing!’”

Mr. Magazine on Finding His Purpose

Before he was Mr. Magazine, Samir Husni grew up in Tripoli, Lebanon. He was first exposed to American comic books (also known as comic magazines) when he saw a television ad for a new series: “Superman.” The weekly comic magazine cost 40 cents, the exact amount of his allowance. He ran to the newsstands to get one.

“As I crossed the street, flipping through the pages of that magazine, something happened,” he says. “Either the ink on paper or the smell of it seeped into my body. From that moment, I knew that’s what I wanted to do with my life.”

After graduating from college at the top of his class, Samir was awarded a scholarship to come to the United States to work on a Ph.D. in journalism. He and his wife left Lebanon for the United States in 1978 on a journey toward what he called “the magazine Promised Land.”

In design, marketing and printing — where pundits are quick to pronounce things dead — Dr. Husni notes that there are more magazine titles on shelves than ever before.

“When I came to America in 1978, I think we had around 1,500 or 1,600 titles available to the general consumer. Now, we have more than 7,000,” he says. “Are we selling more magazines than we did in 1978? No, because we don’t have TV Guide with 18 million subscribers, Reader’s Digest with 18 million or National Geographic with 11 million. But for every TV Guide that sold 8 million copies a week on the newsstands, we have maybe 1,000 titles today to fill that void.”

According to Dr. Husni, the big difference is digital printing. “I remember the days when it used to take 10,000 copies to adjust color on press. But now, technology makes it possible to print 500 copies. We’re seeing very niche, very specific magazines with press runs of 1,000 copies.”

These hyper-focused periodicals serve up in-depth content to narrower yet more loyal audiences. As in other industries, with magazine publishing, it seems the way to go is deeper, not broader. “That’s why I advise publishers and even printers to invest in short-run digital presses,” he says. “That’s the future of the magazine industry.”

Another player is the branded magazine — a periodical produced by a company for its unique audience. (Think Uncommon Path from REI and Paper Matters from Domtar.) By engaging customers with relevant content delivered in a high-touch format, brands can foster a sense of belonging and community.

To Dr. Husni, such tools aren’t merely a luxury — they’re mandatory. “How can you say that you have a 360-degree brand if you don’t have all of the components?” he asks. “To have a complete brand, companies need to manifest on all platforms.”

Mr. Magazine on the Future of Print Magazines

Looking ahead, Dr. Husni remains optimistic. He says print is neither winning nor losing the race against digital; rather, print is integrating itself into the branding ecosystem. Perhaps nowhere else is this more evident than among digital businesses.

“If digital were the same as a magazine, then why would digital companies like Airbnb and Netflix produce printed magazines to engage their audiences?” he asks.

Dr. Husni asserts that people value the sensory experiences of turning physical pages and navigating their way through content. Perhaps more importantly, brands that publish their own content have control over that content. He gives an illustration: “If, for example, Twitter decided tomorrow to ban media companies from using the platform, then what could a brand do? Twitter is a private entity; they control who’s in and who’s out. With print, brands can have complete control.”

Experience matters and print delivers — so much so that it’s redefining the role of the publisher. In the modern glut of information and noise, Dr. Husni believes magazines can help defragment our culture by creating communities around shared ideas.

“We’ve moved from mere content creators to content curators,” says Dr. Husni. “And now, we must become experience makers. The only way to engage your readers is to provide them with an experience in which they can lose themselves. A reader has to feel like a magazine was designed and curated with them in mind — and we have to make that happen.”

A version of this story about Mr. Magazine originally appeared in Domtar’s Paper Matters magazine. Subscribe today to explore the world of print, design and paper.