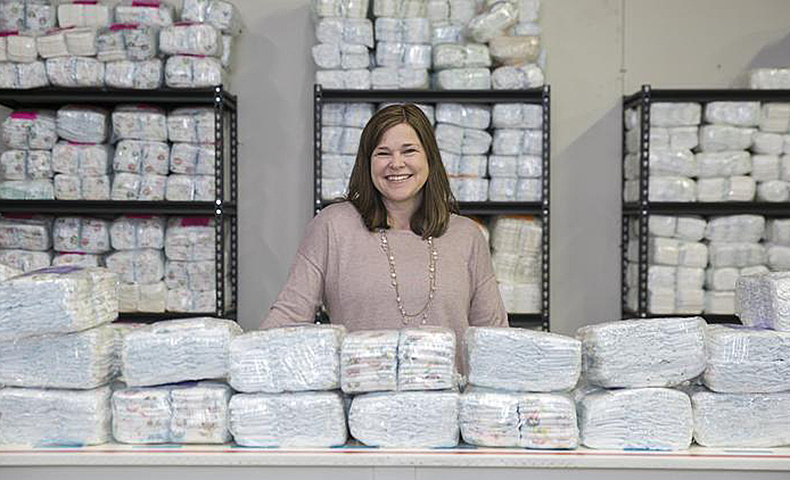 Michelle Old has spent her career helping women and children in need. After an intense experience with her own son, she started Diaper Bank of North Carolina from her home in 2013. Since then, Michelle and her hardworking volunteers have set up diaper banks across the state, serving thousands of families in need. Her goal is for every family in North Carolina to have access to diapers when they need them.

Tell us a little bit about yourself.

I live in Durham, North Carolina, with my husband, three kids, a dog, a cat and eight chickens. We’ve lived here for 17 years, and we love it.

Before I had kids, the majority of my career was spent working on policy reform for domestic violence, specifically as a statewide coordinator for the North Carolina Coalition Against Sexual Assault. I used to travel the country speaking about the intersection of sexual violence and domestic violence and working on policy reform for the Violence Against Women Act. I am also the co-founder of the Human Trafficking Task Force in North Carolina. I have always been an activist.

How did you first start giving back to your community?

When my husband and I began fostering my now-adopted son, Bryce, we were in and out of the hospital three to five times a month for the first year of his life because of his severe diaper rashes. I had the great honor of meeting his birth mother and saw what a challenging economic situation she was in. I became obsessed with the fact that families couldn’t afford diapers in my very own community. I decided to do something about it, and in 2013, I officially started the Diaper Bank of North Carolina from my kitchen table. Our ultimate goal is to have a place where families can get diapers and dignity supplies in every single county.

How has the Diaper Bank had an impact?

Our goal was to distribute 50,000 diapers the first year, but we quickly exceeded that, distributing 209,000 diapers our first year and then more than 500,000 diapers in the second year. This past October, we hit the 1 million diaper mark, and the Diaper Bank is now on target to distribute more than 2 million diapers statewide in 2017. When families receive something as small as a diaper, the impact is huge. In addition to improving the physical health of children, it improves the mental health of parents and provides stability for the entire family.

Can you describe the challenges these families are facing?

If a family is struggling with diapers, that means that they likely struggle with other needs, like putting food on the table and buying school supplies for their kids. These families can use the Diaper Bank as a gateway to other services. We want families to live a full, quality life, and when you can’t afford basic necessities, that goal is very difficult to achieve. We’ve studied the demographics of who receives these diapers. More than 78 percent of families are working one to three jobs and still cannot afford basic necessities for their children, diapers being one of them. There is a misconception about poverty and whom it affects. It is the working poor — families who are working very hard but still cannot make ends meet. We get calls from teachers and military families all the time.

Is there a particular family that stands out to you?

We’ve helped many incredible families, but one mother’s story in particular has stuck with me. She had four children and was putting herself through school. She was getting diapers from the Diaper Bank for a short time when she couldn’t make ends meet. Now, she volunteers with us to help other families in the community. People want to give back and help others. If you help a family have access to basic necessities to support their dignity, health and quality of life, they will be in a better position to help others who are struggling to provide for their families.

How did Domtar first get involved with the Diaper Bank, and what is our role?

Domtar employees from all levels of the company started showing up to volunteer, and they help us package and distribute diapers. One time when Domtar’s North American president was volunteering, he asked me if I knew what Domtar did. When I didn’t, he told me that they actually made diapers. Then, he asked me what the Diaper Bank’s struggles were. At the time, we were working so hard to get every single diaper through drives, donations and purchases. That was always our concern, how to get the next diaper. When Domtar partnered with us, they literally flipped our work from begging for every single diaper to now focusing on where the need is. Because of Domtar’s generosity and commitment to our work, we are able to work with our community partners to identify gaps in the community and come up with a plan to fill those gaps. Last year, a flood wiped out the homes of a lot of the families who were already struggling. Domtar made it possible for us to send more than 200,000 diapers to flood victims without missing one single distribution within our own community.

How has your work changed since partnering with Domtar?

Our work is now more focused and intentional, allowing us to assess what communities need. For example, children cannot go to daycare if they don’t have diapers. We found out that children receiving a diaper in daycare were coming back the next day wearing the same diaper and returning from the weekends with severe diaper rashes. We started sending home a pack of 10 diapers to support families on the weekends. We wouldn’t have discovered that need had Domtar not alleviated the pressure of constantly replenishing our supply.

We also found that 68 percent of families needed potty-training classes. We wrote a grant and have since provided potty-training classes to more than 150 families. We were able to provide transportation to and from classes as well as childcare so parents could focus. We even sent them home with a potty, a book to read to their kids and a guide for themselves, and training pants. One mother said after the class that it made her feel like a better mother.

What role does the community play in the Diaper Bank?

We still rely on community members for diaper drives and donations to help fill the gaps in the sizes we do not have in large quantities. Our community provides 30 percent of the diapers we distribute. On top of the diapers we receive from Domtar and local families, we also receive some diaper donations from other popular diaper manufacturers. It’s a real collaborative effort. More importantly, most of our branches are run by volunteers. We work with more than 250 volunteers who commit two to three hours each month.

Something I did not expect when I started the Diaper Bank was that I would have the privilege and opportunity to work with hundreds of volunteers every month who are from all races, genders and political views and who seamlessly come together with loving hearts and helping hands. It’s one of the most powerful things I’ve ever experienced, and I get to experience it every day. I think there need to be more places like this, places where people can come in and help others and do so in such a loving way.

Amy Smith at the World Wildlife Fund for Nature

Statement on Domtar’s Response to COVID-19