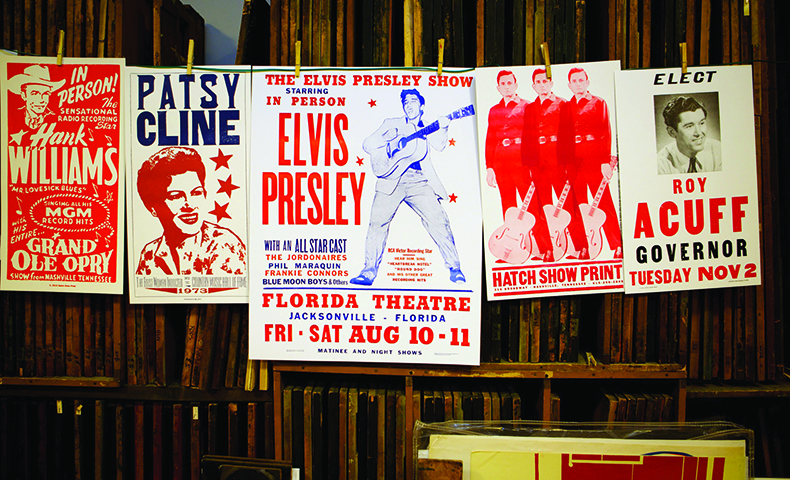 This story originally appeared in volume five of Domtar’s Blueline Magazine. It has been edited for the Newsroom.

For 138 years, the Nashville-based letterpress print shop Hatch Show Print has produced show posters for performers of all types, including magicians, wrestlers and music legends like Johnny Cash and Elvis Presley. Known for its distinctive use of bold colors, eye-catching imagery and hand-carved type, Hatch helped shape early advertising design.

The history of Hatch Show Print parallels Nashville’s transformation into Music City. From 1925 to 1992, the print shop was located behind the Ryman Auditorium — the home of the Grand Ole Opry and the center of the country music universe — positioning it alongside an icon in the industry.

“We’re doing things pretty much the way the two Hatch brothers did right out of the gate in 1879,” says Celene Aubry, the print shop’s manager. “Back in 1879, the dominant form of media was print. Whenever you wanted something produced, you went to your printer. They designed and carved imagery and hand-lettered and sort of predated the establishment of graphic design.”

The printer has always played a content creator role in the process.

“One of the things about Hatch Show Print that’s probably different from many print shops is that the designers and the printers are one and the same,” Aubry says. “The person who designs your poster prints your poster. That creates a seamless connection that makes for better design and a better final product.”

While the shop’s process remains the same, the content Hatch produces and the context in which it’s received has changed.

“Back then, print was aimed at telling or selling you something,” Aubry says. “Today, when we make posters, it’s often to commemorate an experience. A lot of the gig posters we create are sold at the shows. It’s less about advertising the event and more about capturing a feeling. That really opens things up for more graphic or artistic interpretations and presentations. The purpose becomes more conceptual.”

Paper plays an integral role in the creation of every Hatch print. And the print shop’s paper of choice is Domtar’s Cougar® Natural.

“When you’re working with a letterpress, every wood letter or hand-carved image has to be exactly the same height to hit the sheet evenly,” Aubry says. “Cougar is smooth and holds its shape, so things go much quicker and more efficiently. Plus, the tone of the Cougar Natural really shows color in its best light. That’s important, because we hand-mix all of our ink, and we try to put as much color on every poster as possible.”

In 2013, Hatch moved its operations to a storefront attached to the Country Music Hall of Fame and Museum, providing the world-famous letterpress shop with a more spacious and practical environment in which to work and teach. Today, visitors can tour the studio, watch letterpress posters being created by hand, explore the newly expanded storefront, and help spread awareness about this beloved printing process and the Hatch legacy.

The World Wildlife Fund and Domtar: A Sustainable Partnership