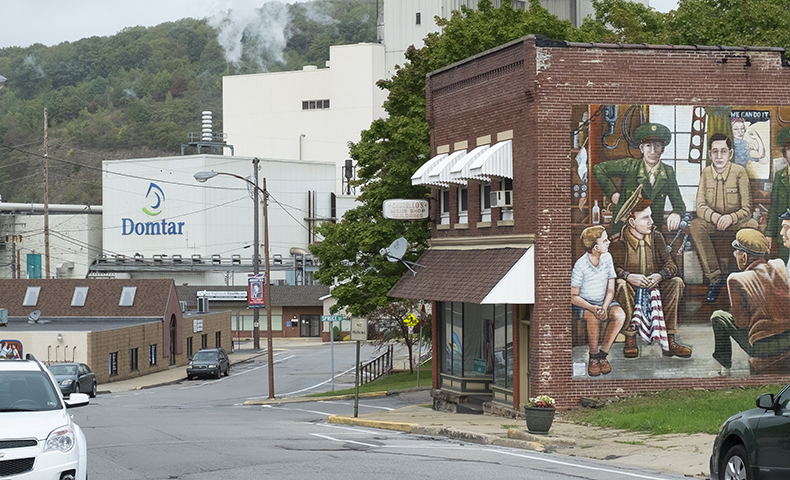 At Domtar, we are proud to be a part of the communities where we work, live and play. In many of these communities, the pulp and paper mill has influenced the development of the town and is often the area’s largest employer. Our Johnsonburg Mill is a great example of how a mill can shape a town.

The Johnsonburg pulp and paper mill has been the backdrop and the backbone of this small Pennsylvania town since 1889. Boasting more than a century of partnership, the mill and the town have developed a symbiotic relationship.

“Domtar is such a part of the community here in Johnsonburg,” says Lisa Simchick, executive administrative assistant to Johnsonburg Mill Manager Greg Linscott. “I moved to Johnsonburg when I was very young because my father got a job working at the mill. I attended grade school in Johnsonburg, and then after college, I came home to work for the mill. Many of the employees working here in Domtar’s Johnsonburg Mill have lifelong ties to the mill just like I do. The mill has not only shaped our town, it has shaped who we are and how we live.”

Johnsonburg, a borough in Elk County, is 124 miles northeast of Pittsburgh and 115 miles south of Buffalo, New York. In its early years, the town used the adjacent Clarion River to run timber from the area’s forests down to the Alleghany River and into Pittsburgh. It also was home to many tanneries, where raw animal hides were turned into sought-after leather goods, such as shoes, belts, handbags, saddles, footballs, baseballs and more.

The pulp and paper mill in Johnsonburg, Pennsylvania dates to the late 1880s.

The plant opened in 1889 at the junction of the east and west branches of the Clarion River. The Clarion Pulp and Paper Company would go through a few name and ownership changes until 1990, when Willamette Industries purchased the Johnsonburg Mill and went to work modernizing it.

In addition to the mill modernization project, the Clarion River was cleaned up and became federally-recognized as a “wild and scenic river.” The mill also received the Pennsylvania Governor’s Award for Environmental Excellence in 1998 for its waste reuse efforts.

In 2007, Domtar acquired the mill after it was briefly owned by Weyerhaeuser. Today, our Johnsonburg Mill supports more than 350 local jobs and has an estimated regional economic impact of $850 million.

It is recognized as one of the most technologically advanced paper mills in the world and produces 344,000 short tons of paper annually. Our pulp and paper mill is also certified by the Forest Stewardship Council® and the Sustainable Forestry Initiative®.

“Domtar has become a true influence in the town of Johnsonburg,” says Greg Linscott, general manager of Johnsonburg Mill. “We are proud to be involved in community revitalization projects and environmental sustainability efforts throughout the area. One of the most impactful projects that I’m very proud to have been a part of is the substantial improvements we made to the Johnsonburg Community Center, as well as other projects like the Learning Lounge in the high school.”

One example of the partnership between the mill and the community is the rebirth of the Johnsonburg Community Center. Originally a gift to the town from the Johnsonburg pulp and paper mill a century ago, the center fell into disrepair over the years.

“Many of the employees at the Johnsonburg Mill expressed a desire for us to get involved with the restoration of the community center. Our mission was to get the center financially stable to avoid closure,” says Linscott. “We did this by building an outstanding fitness center, which in turn significantly increased membership. By helping in this way, we were able to breathe new life into the building. We also donate financially each year to the center to help it continue to prosper.”

With the help of the Domtar Earth Choice Ambassadors (ECAs) and the Student Conservation Association, Domtar employees, family members and friends, and community members  also helped revitalize the center by tossing out junk, cleaning up debris, painting, organizing and repairing drain piping, doors and windows.

“In addition to our donations and our ECA event, one local business owner and a few mill retirees gave the center a complete overhaul by replacing floors, painting, restoring fixtures and more,” says Linscott. “It is quite impressive, the work they did, and together we were all able to save this incredibly important part of town.”

Our Johnsonburg pulp and paper mill has sponsored a learning lounge at the local high school and a reading room at the local elementary school.

Our have also worked with the Johnsonburg Area High School Vocational-Agriculture students and the Elk County Conservation District to plant trees and install bird nest boxes throughout the mill property as part of Domtar’s $1K Your Way Program.

The Johnsonburg mill has contributed to many other community projects, such as sponsoring brand new electronic score boards at the high school, supporting local recreational ball fields and participating in Adopt-a-Highway projects.

6 Proofreading Tips That Start With Paper