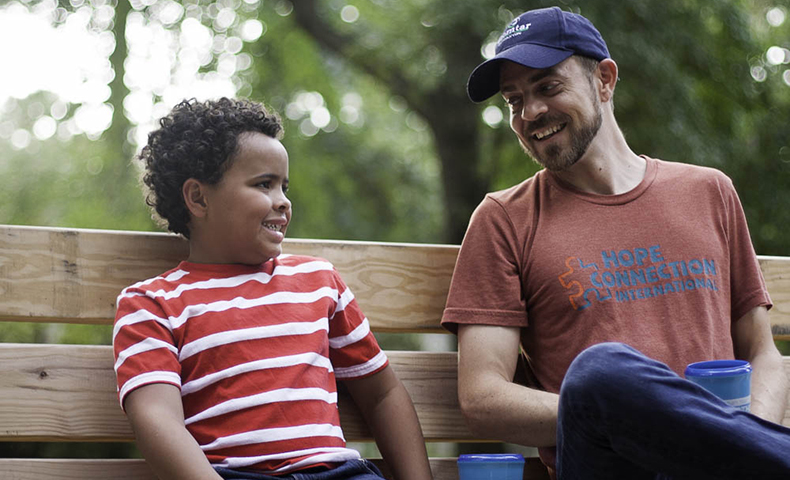 Why do you feel compelled to work on domestic violence issues?

I come from a strong family. My mom and dad were amazing. But both of my parents suffered abuse in their families.

My mother was an abused child. She did not address her past, and it caught up with her as an adult. As a child, I watched her go through periods when she wasn’t well. It had a heavy impact on our family. She had trouble coping with reality. It stemmed from the perpetrators never admitting to what they did, and I learned that her reaction is very common.

My father wasn’t abused, but his mother went through horrific abuse in her first marriage and that affected him greatly.

Victims of abuse have a stronger tendency to become abusers later in their lives, but my parents found a way to stop the cycle of violence in order to give their children a better life. I believe that with the right help, others can do the same.

How did you find Hope Connection International?

Both of my parents were diagnosed with cancer a few years ago. I was sitting at work, thinking about them, about life in general and how I could be doing something more but I didn’t know what. Then I heard about Hope Connection International, and it grabbed me. It’s a grassroots organization that helps victims of domestic violence in the community.

What do you do for Hope Connection International?

I started in 2015 by putting together a business plan for their thrift store, and the board of directors liked the plan. We take donated furniture and interior design items and we refresh or repurpose them, or even create our own furniture out of the materials. The store hasn’t officially opened yet as we are waiting on funding, but we will eventually sell the items to help fund our programs.

Last summer, the board of directors brought me on as the director of marketing. In this role I write grants, update the website, and develop marketing and advertising campaigns.

Tell us about that.

It’s a barbecue sauce that my wife and I developed called Southern Bang BBQ Sauce. It’s a recipe I worked on for 10 years. When I met my wife, she helped me fix it. People would come from church or come to our home for lunch and say, “You’ve gotta sell this.” So we decided we would. We worked with the FDA, put together a packaging label and found a bottling company.

Abuse affected both my parents greatly. But they are not alone. One out of five women are affected by abuse, and one out of every 11 men. Sixty-five percent of homeless women come from domestic violence situations. Many go back to the abuse because they feel they don’t have a choice or anywhere else to go. And I’ve seen what happens when people don’t address what was done to them. As they get older, they continue the cycle. Hope Connection International can change that.

I want to make some noise. I want people to be aware of the secrets that their friends, family and neighbors are hiding. Sharing that secret is the first step to getting help. And if I can help anyone break the cycle, that’s what I hope to do.

Improving and Protecting Water Quality from the Ground Up

E-Documents or Paper: Which Should I Choose?