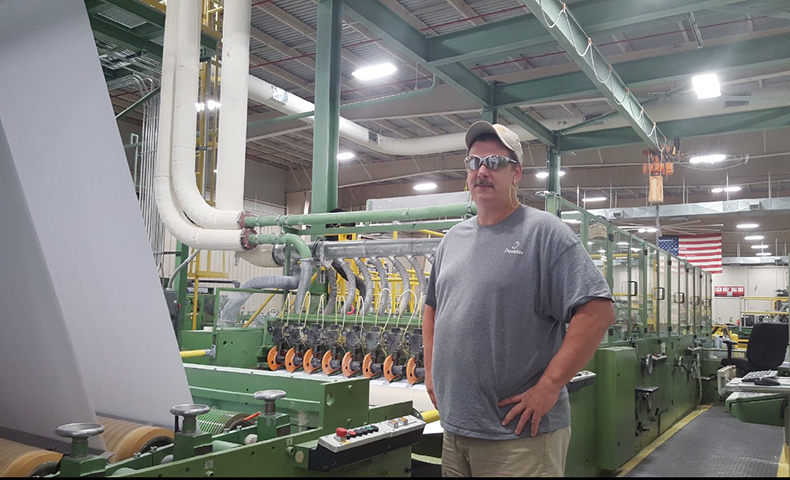 Bartimus has worked as a first assistant sheeter operator at Domtar’s Owensboro Converting Center for 18 years. He started the relief project after seeing photos of the flooding and devastation Hurricane Harvey inflicted on the Houston area.

After just two weeks, the project contributed $6,000 worth of donations to help fill three 53-foot-long tractor-trailers sent to Texas by an Owensboro-area construction company. The 48-year-old Bartimus and his colleagues hope to hold a similar supply drive for victims of Hurricane Irma, which devastated parts of Florida and the U.S. Virgin Islands.

“Jim came to me with the idea of sending donations down to Texas, and it’s been one of our larger volunteer efforts,” said Chris Buskill, plant manager of the Owensboro facility. “Jim has a heart of gold. It’s people like him who spark the ideas and rally people together for a good cause. We’re proud of Jim and are fortunate to support such a noble cause.”

The combined cost of hurricanes Harvey and Irma could reach up to $200 billion, according to Moody’s Analytics and Fortune, and insurance providers and government agencies will be inundated with claims. The devastation caused by Hurricane Maria in Puerto Rico only adds to the overwhelming need.

Support from the business community and private citizens is essential in helping affected communities rebuild. Domtar has donated 135,000 baby diapers to families in and around Houston, and Bartimus and his co-workers took charge of their local relief effort.

Why did you organize a supply drive to aid Hurricane Harvey victims?

When I started to see pictures of the devastation, I realized that people are in pretty bad shape down there. Whole towns were wiped out. In one town, only the high school was left standing. I just saw this enormous need and wanted to help.

What are you and your co-workers doing to help?

My brother Adam works for a company up the road, and they were collecting Hurricane Harvey relief items to drive down to Texas. I went to my plant manager and asked if he’d be interested in teaming up to increase the positive impact.

First, we gave people a list of needed supplies. The response was amazing. Every day, my colleagues at Owensboro would bring car loads of things: water, bug repellent, mops, buckets, brooms, flash lights, batteries, dehumidifiers, dog food, toys. One gentleman came eight times to donate goods. This is really about helping out on something that’s bigger than you are.

Where will the Hurricane Harvey relief donations go?

The trucks will take the supplies to a church just outside of Houston. The supplies will then be distributed to other churches who can reach people.

What have you learned about your colleagues from this experience?

People here are always willing to help if they’re given a way to do it. This community has come together to help people they’ve never met and will never meet. It’s about helping your fellow man and letting them know that they’re not alone when they’re struggling. It’s exciting to watch.

It’s pretty simple. If I see a need, I try to help out where I can. Something like this project may get more attention, but really, helping others is something I strive to do every day.

Greenwashing: What Is It, and How Does Domtar Avoid It?