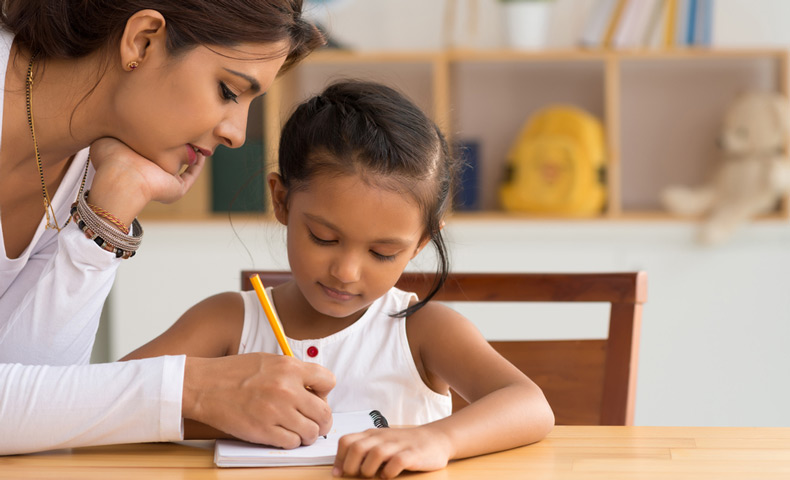 Chances are you’ve seen a CAPTCHA—those distorted letters that you have to enter before accessing information on a website. They protect websites against web robots by engaging a simple skill that humans possess but computer programs do not: handwriting.

It turns out that the ability to distinguish letters—even when they exhibit wide variation in form—begins as far back as our first experiences learning to write.

Individuals engaged in handwriting or reading display a distinct brain activity pattern that involves three separate regions of the brain. The pattern first appears in children’s brains when they are at the earliest stage of learning to write.

“The letters they produce themselves are very messy and variable, and that’s actually good for how children learn things,” said Karin James, a professor of psychological and brain sciences at Indiana University. “That seems to be one big benefit of handwriting.”

In a 2012 study, James asked preliterate children to make the shape of a letter in one of three ways: by either tracing it from an image with a dotted outline, writing it or typing it on a computer. Brain scans, during which the children where shown the letter again, revealed that only writing a letter freehand fully activated the three areas of the brain essential for reading and writing.

Through the handwriting process, children learn to distinguish variations of a given letter as the same letter no matter how differently they’re written. As a result, the messiness of handwriting actually becomes a part of the learning process.

“When a kid produces a messy letter, that might help him learn it,” James said.

Virginia Beringer, a professor of education psychology at the University of Washington, conducted a study that followed children in grades two through five. She showed that children who wrote by hand, instead of typing on a keyboard, were better at generating composition ideas. They also experienced greater neural activity in the areas associated with reading and writing.

Handwriting also offers significant advantages for adults. Daniel M. Oppenheimer, a professor of marketing and psychology at University of California, Los Angeles, and Pam A. Mueller, a graduate student at Princeton University, conducted a 2014 study on the advantages of longhand note-taking. They found that older students learn better when they handwrite their notes rather than type them on a computer. Their research suggests that handwriting notes depends upon the students recasting a lesson’s contents. This process requires them to contemplate and organize the material, which then helps improve understanding and memory.

“College students who are writing [notes] on a keyboard are less likely to remember and do well on the content than if writing it by hand,” agreed Laura Dinehart, an associate professor of early childhood education at Florida International University. But there is clearly a need for keyboards and typing in academics, especially for older students. So how can educators give students the benefits of handwriting while also preparing them for the digital world?

“What we’re advocating is teaching children to be hybrid writers,” Beringer said. “Manuscript first for reading—it transfers to better word recognition—then cursive for spelling and for composing. Then, starting in late elementary school, touch-typing.”

To learn more about the benefits on handwriting, read “Why Handwriting Is Still Essential in the Keyboard Age” and “What’s Lost as Handwriting Fades.”