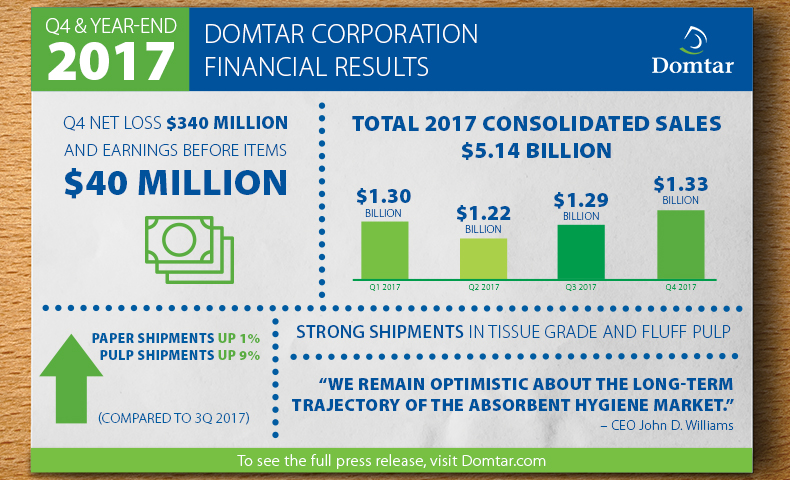 Commenting on Personal Care, Williams added, “While we had good results in 2017, we have concluded that the performance of our Personal Care business will continue to be impacted by an increasingly competitive market. We remain optimistic about the long-term growth trajectory of the absorbent hygiene market; however, this increasingly competitive market will negatively impact our sales, and we expect the environment to remain challenging for the foreseeable future. Importantly, the goodwill impairment charge is non-cash. It does not alter our current financial flexibility, and our overall cash generating capabilities remains strong.”

As a result of its annual goodwill and indefinite life intangible assets impairment tests, Domtar recorded a non-cash goodwill impairment charge of $578 million associated with Personal Care. Growing competitive market pressures in the healthcare and retail markets over fiscal year 2017, including the entry of new competitors in the private label category, excess industry capacity and the decline of healthcare spending by governmental agencies, are expected to result in lower than previously anticipated sales and operating margins. In light of this weakened market outlook, our current business forecast was not sufficient to support the carrying value of the goodwill associated with Personal Care, leading to the impairment.

Commenting on the fiscal year 2017 results, Williams said, “We generated nearly $450 million of operating cash flow and continued our solid track record of rewarding shareholders with a high payout ratio while maintaining financial flexibility. Our performance, combined with our confidence in our cash flow generating capabilities, enables us to announce a 4.8 percent dividend increase. Looking ahead, we remain focused on maximizing long-term profitability and value creation.”

In 2018, costs, including freight, labor and raw materials, are expected to marginally increase. Our paper shipments should benefit from expected industry capacity closures, while paper prices should improve following the recently announced price increases and pulp will benefit from volume growth in fluff. Personal Care is expected to be negatively impacted by an unfavorable tender balance, resulting in lower volume and operating margins.

All information from this Domtar financial report is in U.S. dollars, and all earnings per share results are diluted, unless otherwise noted.