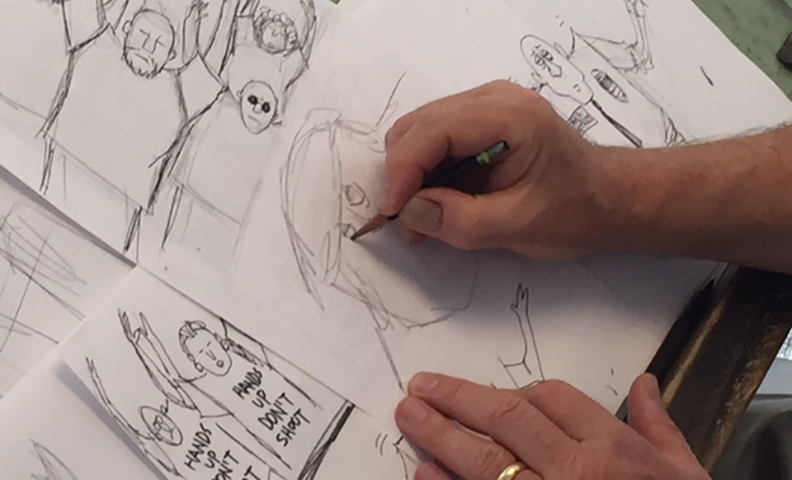 Siers, a 30-year veteran of the newspaper, says paper is an integral part of his creative process. His editorial cartoons combine artistic skill, political insight and well-aimed wit, backed by a healthy set of nerves. In a single frame, he can move readers to tears or double them over with laughter. From the subjects of his cartoons, he will often receive a call or, occasionally, a cursing.

“A written editorial is usually a well-reasoned argument,” the editorial cartoonist said. “People can engage with it, agree or disagree with parts of it. But it’s hard to argue with a cartoon. It’s much more emotional and less intellectual. Readers want to argue with the editorial writers. They want to punch the cartoonist.”

After reading the day’s news and talking with colleagues, Siers begins sketching early ideas on a notepad or scrap paper.

“It’s mainly a place to collect thoughts, put random scribbles down,” he said. “It’s not so much recognizable yet as an object or an image, but just trying to capture an idea.” As an editorial cartoonist, all of Siers’ ideas relate to current events and issues.

As a concept emerges, he’ll sometimes take multiple sketches and layer them on a light table to see how the pieces come together.

“I know it can be done on the computer,” he said, “but this is how I learned to draw.”

It’s true that many of his counterparts at publications across the country now use drawing software, but Siers says he still enjoys the feel, look and sound of creating his work on paper.

“It’s a very tactile experience,” he said. “I’ve tried using a tablet, but it’s just not the same. With the pencil, then pens and brushes, I like pushing down on them. There’s a certain weight on a line with how you push and pull on it. When you’re drawing that perfect line, you feel it as you draw it.”

He begins with pencil on paper, then moves to a pen. Each cartoon is then finished with watercolor brushes dipped in India ink. It can be a messy process that leaves him with ink on his fingers, graphite on his palms and, occasionally, a spot on the carpet.

For someone like Siers, a journalist and an artist, paper is the perfect medium.

“I have something to say, and this is a unique way to get my voice out there,” he said.

How Much Do You Know About … Paper? Take Our Paper Quiz

Learn About Water’s Journey from River to Mill — Take Our Water Quiz!