Domtar Volunteers at Camp for Adults with Disabilities 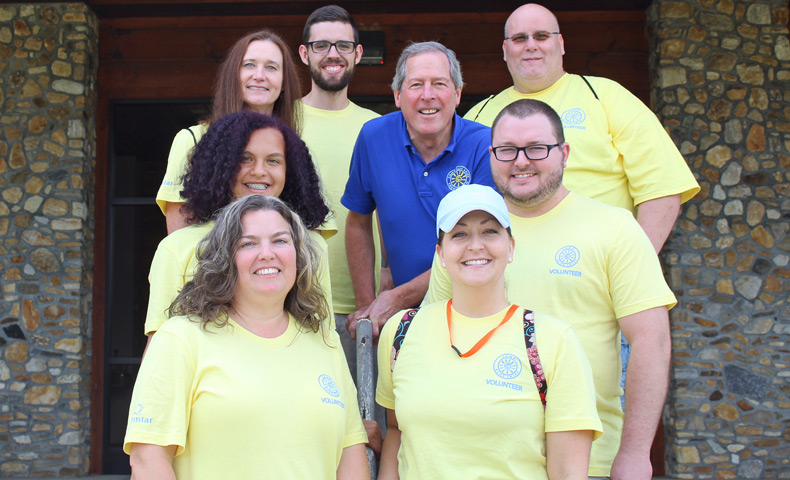 Millions of people make memories at summer camp every year. But for adults with disabilities, opportunities can be limited to participate in the outdoor adventures and social experiences often found at camps. They need a camp that provides a safe, friendly environment that can accommodate their physical and developmental needs.

Dick Sesler, a retired Charlotte, North Carolina, businessman, understood this need. That’s why, in 2010, he founded Camp Blue Skies, an overnight camp for adults with disabilities.

The camp has been an overwhelming success and now holds sessions in Georgia and North Carolina. These camps help adults with disabilities enjoy some of the same activities that other campers might take for granted.

Domtar has proudly partnered with Camp Blue Skies for the past two years, and we have invited colleagues to volunteer their time at one of the camps.

“When I first arrived at the camp, I saw campers singing, chanting and cheering, all to the beat of the drum in a circle led by a longtime volunteer,” said Domtar government relations manager Stefan Nowicki. “It was a fun tradition to witness.”

“The singalong was probably the best part of the day,” Nowicki said.

Touched by the Experience

Domtar finance manager Trish Taylor spent three days volunteering at the camp and expressed her gratitude for the experience in a letter to Domtar President and CEO John Williams.

“I wanted to send you a big thank you for bringing the opportunity to volunteer at Camp Blue Skies to us,” she wrote. “Seeing the excitement on the campers’ faces as they arrived was unbelievable. But that was just the beginning. As the days went by, I saw some of the campers who were not very outgoing begin to open up and interact with others. They were engaging in conversation and were so excited to have someone enjoy their company. I know I was there to help the campers, but I left feeling like they helped me even more than I helped them. I was touched by each and every [camper] at Camp Blue Skies and will definitely be volunteering at future camps.”

Learn more about Camp Blue Skies and the many benefits of camp for adults with disabilities.

People Are At the Root of Healthy Forests

Domtar Gives Back with the Student Conservation Association

Domtar Sustainability for 2020 and Beyond