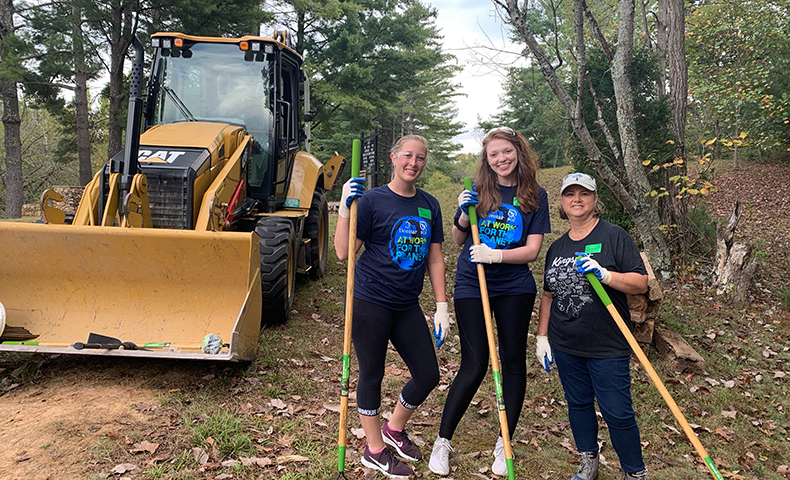 Visitors to Warriors’ Path State Park in Tennesse will enjoy a smoother hike this fall, thanks to the efforts of Domtar’s EarthChoice® Ambassadors (ECAs). These volunteers are committed to transforming communities where they live, work and play.

In October, ECAs from our Kingsport Mill and our Ridgefields converting facility worked with the Student Conservation Association (SCA) to clear trash, install steps and restore trails in the park. As part of this joint effort, our colleagues removed 35 decaying steps and replaced them with new ones, and they picked up more than 135 pounds of trash. By the end of the day, they had restored a section of pedestrian trail for public use.

Our Kingsport Mill and Ridgefields converting facility worked with the SCA to clear trash, repair steps and restore a trail at Warriors’ Path State Park in Kingsport, Tennessee.[/caption]

While Domtar volunteers have been transforming communities through similar events for many years, this was the first such project for the newly formed Ridgefields ECA team.

“I’m honored to be the captain of the new Ridgefields ECA team,” says Heather Fultz. “The team and I are so proud to have been able to be a part of something that will have a positive impact on the community.”

Heather Stowe, Domtar’s corporate social responsibility manager and creator of the program, has led efforts to establish an ECA team at each Domtar facility in our network.

“I’m always so humbled and amazed when I see the inspiring things our ECA members are accomplishing in their communities,” says Stowe. “With the recent installations at the Ridgefields and Tatum converting facilities, we have successfully built an ECA team at every single Domtar facility in North America. That is definitely something worth celebrating.”

Transforming Communities One Project at a Time

Since 2012, our ECA teams have regularly joined the SCA in projects focused on transforming communities throughout the United States and Canada. Other recent projects include: