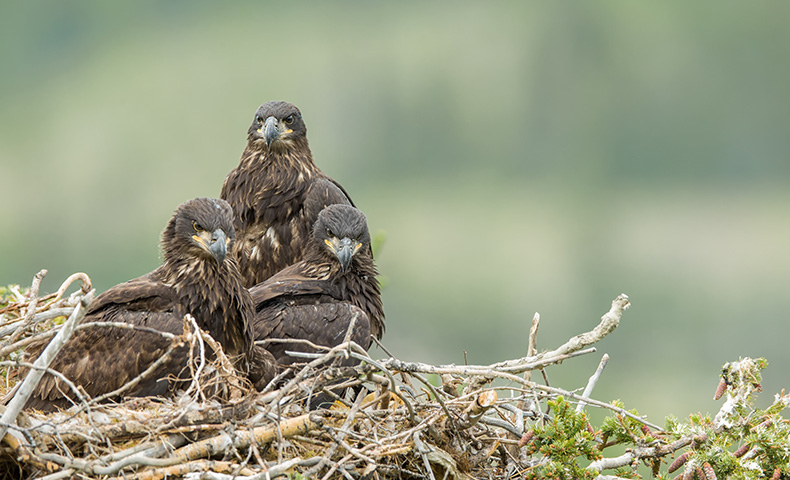 A Domtar wildlife preservation program at our Nekoosa Mill has been helping to protect and increase the local bald eagle population for more than 30 years.

Recently, as part of the program, two female bald eaglets were found nesting in an oak tree on mill property in Nekoosa, Wisconsin. The eaglets, a mere two months old and weighing 11 pounds each when they were discovered, were tagged by the Wisconsin Department of Natural Resources (WDNR) for study. Now, months later, the eaglets are thriving.

“They seem to like it here,” said Tracy Wawrzyniec, Domtar engineer for environment and safety. She is working with the WDNR to protect these and other bald eagles on the mill’s property. Wawrzyniec, who first became involved with the program as an environmental intern, is thrilled with the progress she’s seen. “We are doing everything we can to help protect and increase the number of eagles in the region including cleaning along the Wisconsin River,” she said.

A national symbol since its image was placed on the country’s official seal in 1782, the bald eagle population was threatened in the 20th century due to loss of habitat, illegal hunting and contamination of its food source. (DDT, a once-popular pesticide, was used to control mosquito populations but ended up seeping into lakes and other water bodies where eagles feed on fish.) The bald eagle population had plummeted to just 417 mating pairs in the United States by the time the species was declared endangered in 1967.

In 1974, bald eagle numbers in Wisconsin were dismal, with only 107 active nests found within the state. But by 2016, the number of active nests had increased to 1,504, according to surveys by the WDNR. Widespread study of the bald eagle population largely ended in 2007, when the bald eagle was removed from the endangered species list, but local agencies still monitor the animals and their habitat.

The WDNR, for example, has conducted bald eagle nest surveys for decades in key habitat areas, including those adjacent to open water, where tall pines and limited public access allow for nesting and reproduction. Each April, the WDNR conducts aerial count of nests, and it returns in May to count the number of eaglets hatched. Often, groups of young eagles are chosen for additional study. WDNR staff climb the nesting trees and carefully lower the young birds to the ground to give them a physical exam and tag them for future study before returning them to the nest.

Current estimates suggest that more than 10,000 nesting pairs exist in the lower 48 states. Bald eagle population recovery is credited not only to government protection, but also to individual landowners and corporations who have committed to responsibly managing land where eagles reside, such as our Nekoosa Mill property.

Domtar works with the WDNR and area residents to encourage growth of the bald eagle population. The management plan is simple: Maintain a friendly habitat for bald eagles, which means refraining from cutting down trees in known bald eagle habitats and keeping human activity in nesting areas to a minimum.

“These efforts are part of the general forest maintenance and tree health that Nekoosa officials are working on,” said Craig Timm, government relations manager at the Nekoosa Mill. “The bald eagle is an important symbol to the United States, and we are working to do our part to preserve the majestic species. We are pleased that our partnership with the city of Nekoosa and area residents is having a positive effect on bald eagle population growth.”

Nekoosa’s successful bald eagle program is yet another example of Domtar’s efforts to conserve natural forests and biodiversity, which is one of the company’s Sustainable Forestry Principles. Other recent initiatives include Johnsonburg Mill’s re-establishment of the local elk population and Marlboro Mill’s wildlife management plan, which has helped wild turkeys thrive.

To learn more about our sustainability principles, visit the Domtar Newsroom.

Notary Publics and Paper Still Matter in a Digital World

Did You Know: Five Facts About Stephen King

How a Culture of Sustainability Benefits Business