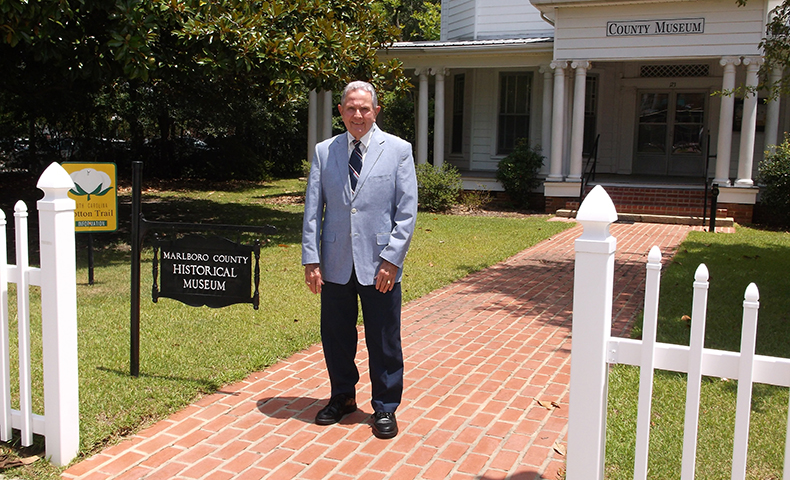 In 1990, South Carolina was in the throes of courting Willamette Industries, then one of the world’s largest paper companies, in hopes that it would settle on the banks of the Great Pee Dee River in Marlboro County, on the northern border of the state. The stakes were high: The mill would bring jobs and stability, and it would generate new tax income for the county and state.

Leaders looked to William “Bill” Light Kinney Jr. for help. Kinney has lived his entire life in Bennettsville, Marlboro County’s largest city, with nearly 9,500 residents. He is the town’s beloved historian, and he’s widely known throughout the region as the heart and soul of Bennettsville.

So when Willamette executives came to town more than 25 years ago, Kinney led their tour of the city and county that would become the paper mill’s home. He shared details of the area’s history, introduced them to its people and educated them on the historic land that would eventually become Domtar’s Marlboro Mill in 2007.

“Part of my love for Domtar stretches back to the beginning and that tour,” said Kinney, who leads historical walking tours of Bennettsville each year. “I’ve always been a strong proponent of the paper mill because they were going to invest so much in our community. I was extremely proud of the tax base and the jobs it could provide. I viewed it as a win-win, and it has proved to be true.”

Below, Kinney talks about his early days in Bennettsville, his career and his love for preserving history.

How did you come to know the history of Bennettsville and Marlboro County?

I learned a tremendous amount listening to my family talk. My uncle, Prentiss Kinney, was a doctor, and I went on house calls with him. I asked people about their homes, churches, cemeteries, etc. They didn’t think I was a nosy child—just interested. I became president of the Marlboro Historical Society. I joined the state confederation of historical societies, which opened me to tours and historic sites across the state. I continue to serve on the South Carolina Archives and History Commission.

And now you provide tours of Bennettsville?

I do a walking tour for Leadership Bennettsville once a year and for school history classes as requested. I am interested in the city’s distinctive architecture. It’s the kind of thing that makes life interesting and people proud of where they live. Bennettsville will be 200 years old in 2019. Our old movie theater, now a performing arts center, is 100 years old, and it has a huge Moroccan entry arch—the only Moroccan arch in South Carolina. I know a lot of our town’s historical trivia. It makes for a good story, and I like to tell it. And the more I tell it, the truer it is.

What is your favorite bit of Bennettsville trivia?

Well, there are many. But one bit of trivia that is interesting is that we have dimpled sidewalks. The contractor put them in because back in 1908, we had dirt roads and the streets would get muddy. He wanted the sidewalks to have traction for the people so they wouldn’t slip and fall. Ten years ago, when we had to redo the sidewalks, the contractor wanted to put the dimples back in but he didn’t know how to do it. The contractor asked me to help him out. The rubber insert from a pickup truck bed, pressed into the concrete, proved the best solution. These are things I love to tell people. It makes me proud to live here.

Why is the Marlboro County Historical Museum special to you?

It was my Kinney grandparents’ 1902 home. My granddaddy was a county doctor, and in 1933, I was born in his home. I lived there for several months as a colicky infant. It’s a historic house, and my uncle decided to gift the house in his will to the Marlboro Historical Society. Now I tell people I was born in a museum.

Tell us about your career.

I graduated from Bennettsville High School and was president of the senior class. I got a pre-med degree from Wofford College in Spartanburg, South Carolina, in 1954. But after graduation I decided not to go to medical college like my grandfather and uncles had. I was trying to please my family by becoming a doctor but I decided that was not what I really wanted to do with my life. My family was gracious enough to accept my decision. The third day after graduation, I had a conversation with my parents and told them I’d decided to go into the newspaper business with them. So I attended the University of South Carolina in Columbia for a journalism degree, and in 1999, Wofford College awarded me with an honorary doctoral degree.

What is your family’s newspaper history?

In 1931, my parents started the Marlboro County Herald. In 1952, they purchased their competitor, the Pee Dee Advocate, and combined the papers to become the Marlboro Herald-Advocate. Back at home in 1958, after U.S. Army duty, I joined my parents’ paper. I was hired as an advertising salesman. My dad wanted me to learn from the ground up. After that, I became the news editor and managing editor. In 1971, I purchased their stock and became editor and publisher. In 2014, my daughter became publisher and my son-in-law the editor. I am now editor and publisher emeritus.

I think making a difference is about letting people know how great it is to live in a community like ours. Nothing satisfies me more than knowing—or hoping—I’ve made a difference from living here and giving here.

Watch this historical tour of downtown Bennettsville, with Kinney as your guide:

Thanks for Sharing: Put It on a Postcard Campaign is a Success