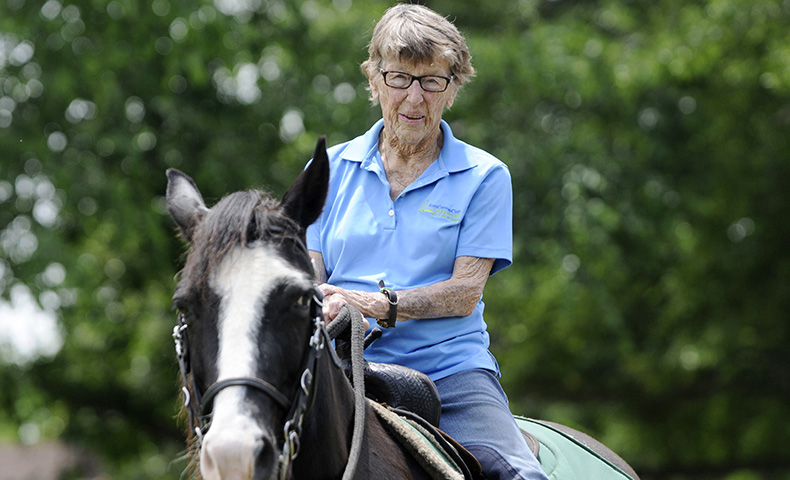 “Ms. Close has left an indelible sustainability imprint on our community with her efforts to preserve nature and educate people about conservation. We are honored and privileged to have partnered with her for so many years through her namesake, the Anne Springs Close Greenway. She will always be remembered as an amazing woman who had an incredible enthusiasm for living,” says Jan Martin, Senior Manager of Public Affairs and Communications for Domtar and board member of the Anne Springs Close Greenway.

Ms. Close was truly a remarkable woman. Read the full obituary at ASCGreenway.org and continue reading below to learn more about Ms. Close and her many accomplishments.

As a young child, Anne Springs Close often heard the statement: “It’s a sin to be indoors on a sunny day.” Today, at the age of 91, Close continues to follow that guiding principle, which was an early inspiration for her life’s work.

Raised in Fort Mill, South Carolina, Close is the daughter of fighter pilot and textile tycoon Colonel Elliot White Springs and his wife, Frances Hubbard Ley Springs. She attended Smith College in Massachusetts and has a resume brimming with environmental and philanthropic accomplishments. She climbed Mt. Kilimanjaro three times, was a 1996 Olympic torch runner, and is the last living passenger of the German zeppelin Hindenburg’s 1936 transatlantic flight. She is also the mother of 8 children, a grandmother of 28 children and a great-grandmother of 20 children.

Of Close’s many accomplishments, the creation and preservation of Fort Mill’s Anne Springs Close Greenway, of which Domtar is a corporate sponsor, is closest to her heart.

“My desire to conserve the land grew over time as I watched area farms get swallowed up by development and disappear,” said Close. “I decided then to find a way to preserve some land so other children could play in the woods as I did as a child.”

Why did you and your children preserve 2,100 acres of family land to create what is now known as the Anne Springs Close Greenway?

My father was very big on community, and for a long time there was no community recreation department, so companies had to fill that gap. My father set up the Springs Close Foundation to serve the areas where his employees worked and lived in North and South Carolina. He was very specific about where the money would go, but he left it up to the board as to how the money would be spent in those communities.

My children grew up here, went to school here and have become active in conservation issues, so they were all in favor of setting land aside and preserving it. In 1989, we had the documents drawn to preserve the land. This was right after Hurricane Hugo hit, and we had no power for three weeks.

The land was a disaster because Hugo went right through it, But on Earth Day in 1990, we announced that there would be a Greenway. It took us two years to clean up after Hugo, and three years to get the trails ready. We opened on Earth Day in 1995. Now, people can enjoy the Anne Springs Close Greenway for free every Earth Day. It’s our little way of giving back.

Your vision for the Anne Springs Close Greenway led to the creation of a trail network, education programs, camps for children and facilities for concerts and events. What are your future plans?

I don’t know what programs will be here 20 years from now, but I can die happy knowing that the Greenway will always be green. The land trust has strict guidelines as to what can and can’t be done, so I know it will always be undeveloped. Support from companies like Domtar help us continue our mission to preserve this natural treasure for generations to come.

Do you have a favorite spot in the Anne Springs Close Greenway?

If I had to pick my favorite spot, it would be the swinging bridge. As a child, we would ride our bikes there to swim, and today it’s one of the most popular spots with kids. I love the grist mill too because it’s historically accurate. It’s the reason Fort Mill was started and named Fort Mill. People used to take their corn to this mill to have it ground. I hope one day we can have a grinder so that we can produce Greenway flour and grits.

You support many programs financially and by volunteering. Is there one that is particularly special to you?

It’s called the Exceptional Riders Equestrian Program. We do it in the fall and spring. When my children went away to school they left the horses for me to deal with. One time, one of my daughters brought some people from an adult daycare to ride. They had such a good time getting on the horses and getting out in the woods. So, we started doing therapeutic recreation. It has grown over the years, and I love the program and love all the volunteers.

We also have a wonderful program that gives some college students tuition, which they work off through volunteer work. There was a young woman who used to volunteer with the riding program. She liked it so much she changed her major in college to special education and is now a special education teacher.

Tell us about the time you and Bruce Springsteen raised funds.

In 2010, Bruce Springsteen was headed to Charlotte for a concert, and he said if the Second Harvest Food Bank of Metrolina could raise between $10,000 and $50,000 to feed the hungry, he’d match the funds. The food bank contacted me because I was an active volunteer.

Through my family’s Springs Close Foundation, we were able to provide a $50,000 grant, which Mr. Springsteen matched. The combined contributions allowed the food bank to feed hundreds of people in York, Lancaster and Chester counties, where so many good people who work with us in our family textile mills live.

Why did you decide to climb Mt. Kilimanjaro in Tanzania not just once, but three times?

Well, I’ve always loved Africa and always wanted to do it. When my daughter graduated from college, I gave her a trip, and she went and did it. I never thought I’d do it while raising 8 children; I thought I would never have the chance. But I did it. There are three routes up the mountain, and I’ve done all three.

You are an avid hiker, and you enjoy swimming and horseback riding. What motivates you to stay active?

Growing up, ladies were not supposed to perspire, let alone sweat. But I love the outdoors. I like to hike, I go on a bike trip every year, I ride horses once a week, and I swim almost every day. These activities keep me healthy, and if you don’t keep it up, you’ll lose your ability to keep going.

Being outdoors and surrounded by natural beauty helps to keep people grounded, healthy and strong, both mentally and physically. By getting people out here on the Anne Springs Close Greenway and appreciating it as children, hopefully as they grow up, they will do what they can to preserve it or it’ll be gone.

The rhythms of nature are so important. Looking at those little glass cell phone boxes is not enough. Your imagination grows when you’re outdoors. I hope to inspire people to do their part to help conserve our Earth.